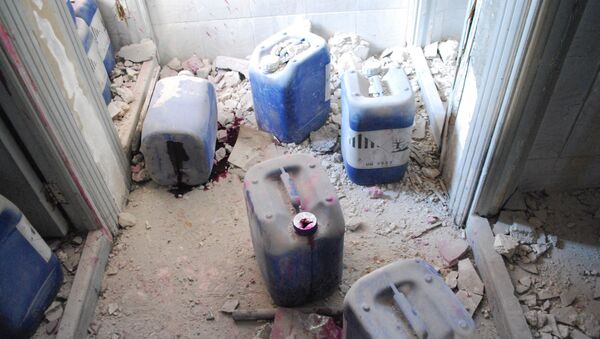 Terrorists from the Tahrir al-Sham group transported several barrels of chlorine gas to the village of Basankul, in Syria's province of Idlib, to stage a false-flag chemical attack, according to a Saturday statement from the Russian Defense Ministry's Center for Syrian Reconciliation.

“Militants of Hay'at Tahrir al-Sham delivered several containers with chlorine in the settlement of Basankul in Idlib province,” head of Russia's Center for Syrian Reconciliation Lt. Gen. Vladimir Savchenko said on Saturday. The center urges leaders of opposition armed groups to refrain from provocations which undermine the political process, he added.

Russian Envoy to US: Militants to Create Provocation in Idlib Aided by UK Forces
On Friday, Russian Foreign Minister Serge Lavrov said that that terrorists controlling Idlib were carrying out attacks on Syrian government forces with the help of resources received from outside of Syria. According to Lavrov, the situation in the region is further complicated by the terrorists use of civilians as human shields.

Lavrov said on Friday that Russia has been providing daily updates of preparations being made by terrorists to stage a chemical attack in Idlib.

"We provide on a daily basis the facts proving that another provocation, which is likely to be carried out by the so-called White Helmets, is being prepared," Lavrov stressed.

The Syrian government has regained control over vast territories of the country following six years of armed conflict with opposition forces and militant groups and is now focused on creating favorable conditions for the return of refugees. The Idlib de-escalation zone, however, remains a stronghold of terrorist insurgency.

UN Chief: Idlib Must Not Be Transformed Into a 'Bloodbath'
Tensions in the region have recently escalated amid reports of a planned chemical attack. Russia believes that this would be a false flag attack by terrorists seeking to provoke another Western intervention into the country, as Western states have previously accused Damascus of alleged attacks on its civilians.

On Thursday, a US Department of Defense official told Sputnik that the non-governmental White Helmets organization has been carrying out strictly humanitarian missions and continues to save civilian lives in Syria.

The Russian Defense Ministry, however, revealed that the White Helmets, are in support of the terrorists, killing 22 families with children as well as orphans kidnapped from refugee camps by placing them in a staged chemical-weapon attack.

Terrorists from a group calling itself Tanzim Ḥurras ad-Din (The Guardians of Religion Organization) were engaged in the direct preparation of sites for the detonation of containers loaded with poisonous substances during the creation of a video about 'chemical attacks', the Russian Center for Syrian Reconciliation detailed.

Over 400 White Helmets Fail to Leave Syria Amid Evacuation by Israel - Reports
The White Helmets and Nusra Front terrorists have approved videos of two scenes which will be transferred to the United Nations and the Organization for the Prohibition of Chemical Weapons; the rest will be distributed in social networks, the Russian Center for Syrian Reconciliation noted.

On Monday, US National Security Adviser John Bolton said that the United States, Britain and France have agreed that any use of chemical weapons by the government of Syria would result in a much stronger military response than previous incidents. The last Western attack on Syria took place after an April chemical incident in Douma, blamed on Damascus by Syrian militants and Western governments. Syria called the Douma incident a false flag operation, stressing that it eliminated its chemical weapons stockpile under the oversight of the Organisation for the Prohibition of Chemical Weapons (OPCW).