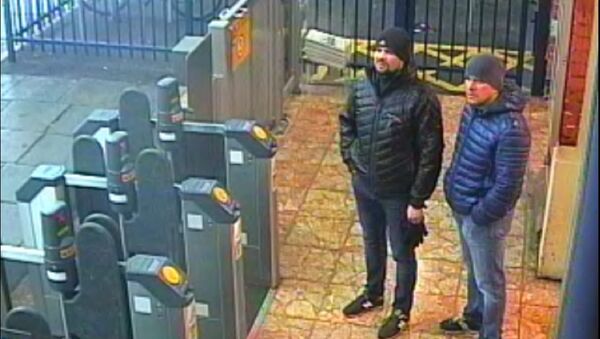 The statement follows an earlier announcement from the Russian Foreign Ministry, made Wednesday, that London had lied when it said that the names of the "suspects" in the Skripal case, Alexander Petrov and Ruslan Boshirov, could be fictitious.

Russian nationals Alexander Petrov and Ruslan Boshirov, who are suspected by London in the Skripal case, did not violate any laws in Russia, there is no official record that they broke laws abroad, Kremlin spokesman Dmitry Peskov said Friday.

"It's not a question of whether this [interview] is to Russia's advantage or not. The UK side named two Russian citizens and accused them of involvement in the incident. Two Russian citizens showed up, the [Russian] president at the forum (EEF) said they were identified," Peskov told journalists answering the question whether it was useful for Russia to interview Petrov and Boshirov.

Strange Skripal Case Becomes Stranger Still
The spokesman stressed that the law enforcers did not take any actions against them, as there was no reason for this. He further explained that the individuals "did not violate any laws on the territory of the Russian Federation" and the Kremlin does not yet officially know whether they have violated any laws internationally.

According to Peskov, the reaction of the UK authorities to the interview of Russian nationals Alexander Petrov and Ruslan Boshirov, who are suspected by London in the Skripal case, is absurd.

"It is absurd to accuse Russia of lying after statements made by two Russian citizens. They are ordinary citizens, they are not related to the Russian government," Peskov told reporters.

5 Things We've Learned From Interview With Skripal Poisoning "Suspects"
He also noted that any attempts to link Russian authorities to the Skripal case was unacceptable stressing that the position of Russia is "absolutely unambiguous, transparent and consistent".

In addition, Peskov said that the Russian side would allow the British police to question Petrov and Boshirov in Russia.

Moreover, if the United Kingdom requests Russia’s assistance in the investigation into the Skripal case, Moscow will consider it in strict compliance with law, the spokesman said.

He noted that there was "a certain mechanism for providing legal assistance, which is governed by bilateral documents and international law".

"Without doubt if such a request is made it will be looked at by the Russian side in strict accordance with Russian law," the spokesman said.

Earlier on Thursday, the interview of Petrov and Boshirov with the RT broadcaster and Sputnik news agency was released, in which they said that they had visited the United Kingdom as tourists, and refuted any involvement in the Skripal case, saying that they had no relation to the Russian military intelligence service (GRU). The UK Foreign Office called the interview of the Russian nationals "obfuscation and lies."