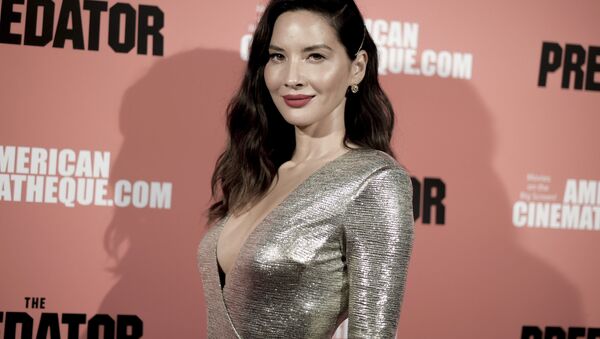 © AP Photo / Richard Shotwell
Subscribe
American actress Olivia Munn, who stars in the new film The Predator, has received overwhelming support after she spoke out against acting in a scene with a registered sex offender.

Film director Shane Black, who recreated the 1980s sci-fi classic, cast his friend Steven Wilder Striegel, who tried to entice a 14-year-old girl into a sexual relationship on the internet, in the film. When Olivia Munn, who plays the female lead in the move, found out she had to be in a scene with Mr. Striegel, she spoke against it and the scene was eventually pulled.

According to Munn, she felt lonely in her action and during the film's premier on September 6 in Toronto was "ushered past" and was told there was not time for interviews.

Thank you to everyone who came out tonight and showed so much support. Wish I could've done red carpet interviews, but I was ushered past and told we didn't have time. 🤷🏻‍♀️

Since the news broke out, Ms. Munn received support by fellow actors and on her social media.

💛 @ThomasSadoski Your support means so much. It's amazing how many people expect you to put the movie first, especially if you're the lead. On something like this- where a child has been hurt- my silence will never be for sale. And if it costs me my career they can take it. https://t.co/buG6prMWr1

.@KeeganMKey says Fox did "the most appropriate thing" by cutting the scene in #ThePredator including a registered sex offender https://t.co/q6PwDF9eFV #TIFF18 pic.twitter.com/niff8mFDpc

#ThePredator star @_Trevante_ Rhodes says Fox did the right thing regarding the recent controversy over the casting of a registered sex offender in the film https://t.co/q6PwDF9eFV #TIFF18 pic.twitter.com/KbQrYyMcEl

On Thursday, Mr. Streigel's victim, identified as now a 24-year-old Paige Carnes, thanked the US actress for stepping up.

"My purpose in making this statement is to reclaim my identity. I was not able to speak for myself when I was 14. The consequences of this abuse are profound and permanent for some…. Your abuse does not define you. With support from others and strength from within, you can overcome the label of victim and reclaim your identity," she told the Los Angeles Times.

Olivia Munn responded to the statement by Carnes, previously known as Jane Doe.

You are a warrior @paigecarnes3 Your bravery has and will continue to inspire so many people. I have endless admiration for your strength. #JaneDoeNoMore ❤️❤️❤️

Director Shane Black has issued a public apology for casting Mr. Streigel in the film, since the whole incident took place.

"Having read this morning's news reports, it has sadly become clear to me that I was misled by a friend I really wanted to believe was telling me the truth when he described the circumstances of his conviction. I believe strongly in giving people second chances — but sometimes you discover that chance is not as warranted as you may have hoped."

However, Ms. Munn in one her interviews said the director has never apologized to her directly.

The issue of sexual abuse in Hollywood industry was recently highlighted by loud cases, including that of film mogul Harvey Weinstein, actor Kevin Spacey and other members of the US film-making industry.