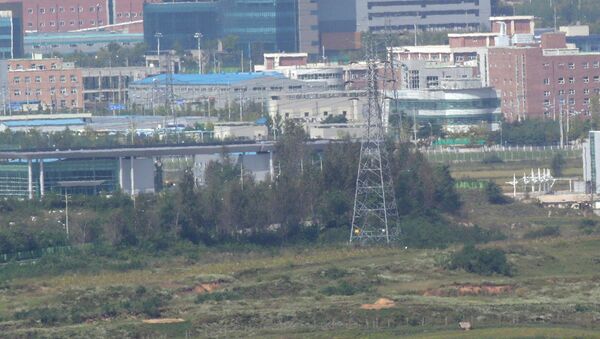 The building in the North Korean city of Kaesong includes separate Northern and Southern offices and a joint conference room, and is intended to facilitate cross-border exchanges following the Panmunjom Summit between President Moon Jae-in and the North Korean leader Kim Jong-un, AFP reported Friday.

"A new chapter in history is open here today," South Korean unification minister Cho Myoung-gyon was quoted as saying by AFP at the opening ceremony, stressing that  "this liaison office is another symbol of peace jointly created by the South and the North."

The two countries announced they would be opening a bureau in April, hoping that the move would facilitate civilian exchanges between the two countries. In August, the South Korean government said that the opening might be postponed amid US-North Korea tensions. However, the South Korean authorities decided that the opening of this office would not be in breach of the international sanctions against North Korea.

The situation on the Korean Peninsula has significantly improved over the last months, with Kim Jong-un having held several rounds of talks with South Korean President Moon Jae-in and a summit with US President Donald Trump in Singapore. During the historic June 12 summit, Kim and Trump reached an agreement that required Pyongyang to denuclearize in exchange for a freeze on the US-South Korean military drills and eventual sanctions relief.