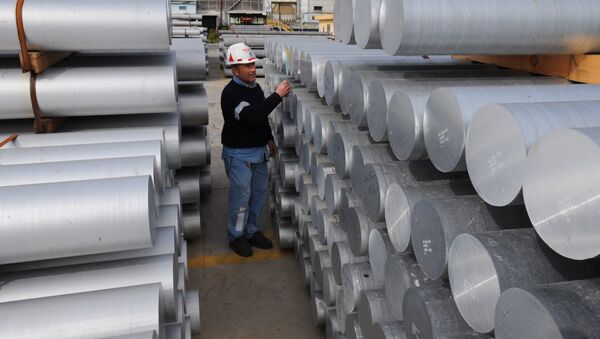 WASHINGTON (Sputnik) - Tariffs imposed by the US government on metals and other imported goods are causing widespread pressures for manufacturers and businesses in the United States, the Federal Reserve said in a report.

‘A Tax on US Consumers’: Trump Tariffs to Push Apple Product Prices Up
The "The Beige Book" report, which summarizes commentary on current US economic conditions, said businesses’ input costs have generally been rising more rapidly than selling prices and there are increased efforts to pass along cost hikes to customers. A few districts noted some increase in inflation expectations, the report added.

The report said citing commercial real estate contacts in Boston that construction costs had increased moderately-to-steeply in recent months because of rising material costs which is partly due to tariffs on imported goods.

In New York City, the report said that a number of contacts working in manufacturing and distribution have seen a rise in their overall input costs due to a hike in tariffs. These entities have expressed concern over the effects of changes in US trade policy, the report added.

In the energy sector, the Federal Reserve of Atlanta reported that tariffs on steel and aluminum may influence the viability of planned industrial construction and plant expansion projects in Louisiana.

'They Will Pay Us Vast Sums of Money': Trump Defends Tariffs in Twitter Tirade
Auto dealers in Chicago have not had to raise retail prices for light vehicles due to tariffs, but they expect to eventually do so, the report said.

Lumber exporters in the US Pacific Northwest noted a decline in demand from China after Beijing announced tariffs on US lumber, the report said.

The Trump administration's trade policies have prompted China, Canada, Mexico, the European Union and others to impose retaliatory tariffs on US goods, particularly agriculture exports.

The China-US trade tensions sharply escalated in March, after US President Donald Trump announced import duties on steel and aluminum. Since then, Washington and Beijing exchanged several rounds of tit-for-tat tariffs, with bilateral trade consultations failing to yield results.