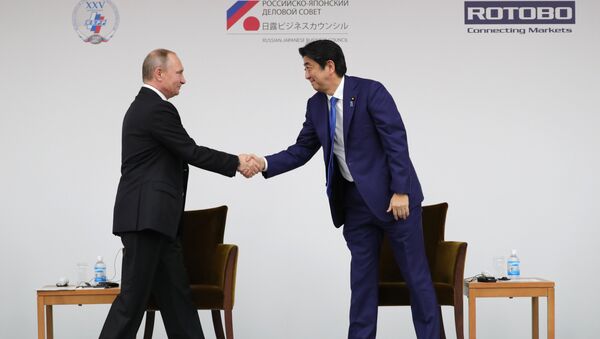 © Sputnik / Michael Klimentyev
/
Go to the mediabank
Subscribe
International
India
Africa
MOSCOW (Sputnik) - Russian President Vladimir Putin’s offer to sign a peace treaty with Tokyo until the end of the year without any preconditions is unlikely to be implemented amid principled differences on the territorial issue between the two countries.

However, there is every reason to believe that the next couple of years in Japanese foreign policy will be devoted to drastic improvement in bilateral ties, which is seen by both sides as a major step toward settling years-long dispute, experts told Sputnik.

At the plenary session of the Eastern Economic Forum (EEF) on Wednesday, Putin proposed signing a peace treaty between Russia and Japan until the end of the year without any preconditions.

Asia
Problem of Signing Russia-Japan Peace Treaty
The statement came after Japanese Prime Minister Shinzo Abe said at the EEF session that he and Putin would make every effort to conclude a peace treaty between the two countries.

The Japanese Foreign Ministry later refrained from commenting on Putin's statements, noting that Tokyo's position on the peace agreement with Russia had not changed, and that the talks on the treaty should follow the settlement of the territorial dispute around the South Kurils, not the other way round.

The fact that Japan and Russia have never signed a permanent peace treaty after the end of World War II has long been a stumbling block in bilateral relations. The main issue standing in the way of a treaty is an agreement concerning a group of four islands that both countries claim — Iturup, Kunashir, Shikotan and Habomai, collectively referred to as the Southern Kurils by Russia and the Northern Territories by Japan.

On February 11, 1945, the leaders of the Soviet Union, the United States and the United Kingdom signed an agreement, according to which in exchange for the participation of Soviet troops in the war against Japan, the Kuril Islands and South Sakhalin, lost in the Russian-Japanese War of 1904-1905, were to be transferred to the Soviet Union.

Shinzo Abe: Japan Considering Financing Russia's Yamal LNG Project
The Soviet Union delivered on its promise and entered the war against Tokyo three months after the defeat of Nazi Germany. On September 2, 1945, Japan signed the act of unconditional surrender.

The Soviet Union, however, did not sign a peace treaty with Japan at the San Francisco Conference in 1951, saying that there was no clear indication that Southern Sakhalin and the Kuril Islands had become its sovereign territories under the document.

Nevertheless, on October 19, 1956, the Joint Declaration of the Soviet Union and Japan was signed in Moscow on ending the state of war and the restoration of diplomatic and consular relations. The Soviet leadership decided to note in the document that in meeting the wishes of Japan and taking into account the interests of the Japanese state, Moscow agrees to transfer the islands of Habomai and Shikotan to Japan, however, the transfer itself was meant to be made after the conclusion of a peace treaty between the parties.

After the conclusion of the Japanese-US security treaty in 1960, which still remains in force and stipulates Washington’s right to place its military bases on Japanese soil, the Soviet Union annulled the commitments made in the 1956 declaration.

Putin’s statement is not the first time when Russian leader proposes a deadline for a peace treaty to be signed.

Back in 1997, then Russian President Boris Yeltsin and then Japanese Prime Minister Ryutaro Hashimoto agreed to take maximum efforts to sign the treaty until 2000 on the basis of the Tokyo declaration.

In March 2012, Putin proposed seeking a "hikiwake," a judo term for draw, to settle bilateral disagreements, which would mean a mutually acceptable outcome for both sides, which would have left neither country on a winning or losing side.

Asia
Japan Protests Russia’s Decision to Base Aviation on Kuril Island of Iturup
According to Kazuhiko Togo, a retired Japanese diplomat and the director of the Institute for World Affairs at Kyoto Sangyo University, Putin’s offer should be analyzed within the "overall context" of the two leaders’ years-long efforts to improve bilateral relations, without avoiding the thorny issue of the peace treaty.

"Six years have passed since both President Putin and Prime Minister Abe took their offices in 2012, and during this period, despite the fact that there has been the suspension of negotiations for two years over Ukraine-Crimea crisis, and despite the difficult situation caused by the fact that the Russian problem has taken on a special meaning in the US domestic politics, the intention of both leaders [that could be phrased as] ‘we would like to drastically improve the relationship between Japan and Russia … and we will not avoid the problem of peace treaty, which has been considered difficult, [and should] … be solved in a form that will convince both sides,’ just seems to be indomitable," he told Sputnik.

Togo expressed belief that Abe would be re-elected later in September for another three-year term and would set further "drastic improvement" of ties with Russia as one of foreign policy priorities.

"I am convinced that the most important of the remaining three years' diplomatic tasks will become a drastic improvement in relations with Russia. The remarks of the prime minister in Vladivostok have just summarized it," Togo said.

The expert noted that Putin’s offer, in turn, was, first of all, "reaffirmation of his firm belief that the conclusion of a peace treaty is the utmost important task."

Russia
First Ever Charter Flight from Japan Lands on Russia’s Kuril Islands
"Secondly, such bold remarks were more likely something to, as Buddhist say, ‘put life’ in Prime Minister Abe who is facing reelection, by stating ‘let’s sign a peace treaty while enhancing trust relationship between the two countries and showing flexible thinking,’ and I believe it would be appropriate for the Japanese side to respond to such ‘fighting spirit’ by saying ‘thank you, we will do our best,’" the expert added.

Thirdly, the expert suggested that "sufficient opinions have been exchanged in the various discussions of the two leaders over the past six years," which probably have not been articulated publicly but could become a potential basis for a peace treaty.

Fourthly, the former diplomat opined that the 1956 Soviet–Japanese joint declaration could become a future basis for the territorial dispute’s settlement.

"It goes without saying that we should talk about with each other about concrete environment, framework and conditions for its implementation, and carefully consider how to convince people concerned in both Russia and Japan," he suggested.

With regard to Kunashir and Iturup, the expert doubted that it was possible to "reach agreement on ‘four island at once’ with handing over the sovereignty over these two islands to Japan simultaneously [with Habomai and Shikotan]."

"There may have been a time in the Russian-Japanese relations during the past 70 years when such an agreement could be reached, but I think that there is no such possibility anymore," he pointed out.

World
Russia, Japan Working on Ambitious, Previously Unattainable Projects
The expert stressed the need to continue the countries’ joint projects and "to make the islands symbolize the friendship and cooperation of Japan and Russia" and suggested that Tokyo and Moscow could produce a peace treaty in the forthcoming three years.

"It is definitely feasible to bring it to the conclusion of a peace treaty in accordance with the road map agreed this time. I cannot answer exactly how long it will be, but I am confident that it could be implemented within Prime Minister Abe's term for the remaining three years," Togo concluded.

Consent to Putin's Offer Would be Tantamount to Political Suicide

Irina Romanova, a professor at the Moscow State University’s Institute of Asian and African Studies, in contrast, questioned the possibility of a peace treaty being struck between the two nations in the near future. The expert suggested that Abe’s consent to sign a treaty without a reached compromise on the territorial issue would amount to political suicide.

"I think this is a maneuver. I think that Abe will not go for it, because if he goes for it – which means not mentioning the territorial issue [in the peace treaty], – it would be, in my opinion, political suicide. Neither the Japanese elite nor the cabinet … will forgive him [such a move] … I think that it was a sort of maneuver on Putin’s part, a kind of demarche. This follows logically from all meetings, statements, messages and in general the history of the issue. I think that in the near future, at least in 2018, the treaty cannot be concluded without discussing the territorial issue," Romanova told Sputnik.

WWII Outcome Not Subject to Review

Valery Kistanov, the head of the Center for Japanese Studies at the Institute of Far Eastern Studies of the Russian Academy of Sciences, noted that Putin’s initiative had only exposed a gap between the two countries’ stances on the issue.

"The Japanese position: islands first, the treaty then. We say ‘No’: the treaty first, then the talks on the islands … These differences in principled positions will not allow, as Putin suggests, for a peace treaty to be struck before the end of the year. I think it is unlikely to be concluded in the foreseeable future, because it is unlikely that Russia will go for it, that Putin will go for the idea of transferring some part of Russia’s southern Kurils to Japan, because our principled position is that Russia owns these Islands legally, following World War II, its possession of the Islands is based on the whole set of international legal documents, sovereignty over the islands is beyond doubt. The Japanese do not agree," Kistanov told Sputnik.

Russia
First Visa-Free Japanese Delegation Arrives in Kurils
The expert suggested that setting any time frame for the conclusion of a peace treaty was futile since it was a very complicated issue whose resolution may take decades. As an example, he drew Yeltsin’s 1997 initiative to sign the treaty by 2000, which predictably had not been implemented.

"I think that [the signing of the Treaty] in the foreseeable future is unrealistic. Any Japanese politician who stops putting this [territorial] problem above the conclusion of a peace treaty will thereby sign their death sentence in political terms," he argued.