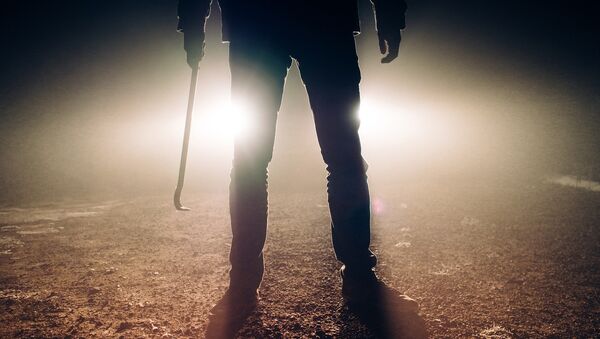 London has recorded its 100th homicide earlier than during any year since 2008 and the man in charge of the murder squad says social media is now a "big issue". Sputnik reporter Chris Summers attended a special briefing where more details were given about what lay behind episodes of "frenzied violence" in the capital.

Drugs and social media were both "drivers" when it comes to attributing the reasons for the number of murders in London this year, Assistant Commissioner Martin Hewitt told reporters at New Scotland Yard on Thursday, September 13.

"Social media is certainly an issue and things like drill music. It's a relatively new world for all of us. We are much better equipped to deal with it than we were…there is no doubt that there are a lot of links to the violence in drug dealing and the drug business," Mr. Hewitt said.

In June last year Osman Sharif was stabbed to death in Tottenham, north London, after a dispute with another youth on Snapchat escalated. In January his killer, Abdulrahman Ali, was jailed for life.

"There are offenses where you can say that it took place through provocation on social media. Groups have always had provocation but now it's instantaneous and very widespread. You get a rapid escalation. It's a big issue," Mr. Hewitt said.

The number of homicides in London this year has now reached 100.

Here's how it unfolded across the capital as 2018 went on pic.twitter.com/Aypm14pKc8

​London recorded its 100th homicide on September 6, when Memunatu Warne, 43, an "inspirational" teacher from Sierra Leone, died in an arson attack in Greenwich, south east London.

Of those 100 deaths, three are being treated as manslaughter and the other 97 as murder.

On September 13 the Metropolitan Police gave a breakdown of the 100 victims.

Rapper 'murdered by armed mob after he tried to gatecrash party' https://t.co/bSlpORMvf0

They said 22 appeared to be gang-related and 40 victims were under 25, with 43 victims being of African or Afro-Caribbean origin and 36 of white European extraction, 55 of the killings happened in the street or in public areas like shopping centers.

Fifty-five of the victims had previous criminal convictions.

The death toll included 67 stabbings, 10 shootings, four by strangulation, four by arson and 18 who were beaten to death.

Scotland Yard also reported 111 people had been charged with murder in London since January 1 this year, although some of those were for crimes dating back as far as 2011.

Moving 122 officers from traffic to crime taskforce 'a sticking plaster': There have been 100 homicides in London so far this year. https://t.co/rTFDaWMMzF pic.twitter.com/6p8WfO0zrx

​Chief Superintendent Richard Wood said there was no single factor was responsible for the surge in violence.

"We have reached the 100 mark very early this year and there is a lot of human trauma behind it. There have been some very violent attacks, with frenzied violence. There have been multiple suspects and sometimes there has been a reluctance of people to come forward and give evidence. It's a complicated landscape," Chief Supt. Wood told reporters.

"We are still short of detectives, although we have more than we have ever had," said Mr. Hewitt, who praised his murder teams and said their detection rate was much higher than had been reported in the media.

Some Homicide Detectives Are Juggling 15 Cases At A Time

Several detectives told Sputnik how they juggled with up to 15 homicide cases at a time and were often forced to put older cases on hold while they dealt with new murders.

"If only murder would stop for a few weeks, so we could catch up," one quipped to Sputnik.

These are the latest murder figures for @CityofCleveland from January 1st until September 9th. They are broken out by @CleCityCouncil wards, race, age, and gender. At this pace #Cleveland will surpass 100 homicides for the 6th consecutive year according to the #MedicalExaminer pic.twitter.com/j70rD6BuwN

"We would want greater access and quicker access to all social media evidence. There is a whole load of work going on with social media platforms to get them to be as helpful as possible, not just with murders but also in the fields of terrorism and child abuse. The frustration comes when we can't access them as quickly as we want," Mr. Hewitt said.

The briefing heard how bureaucratic the process can be, with detectives having to liaise with the Crown Prosecution Service, who have to send an international letter of request through the Home Office to the relevant country and then get permission from that country's law enforcement agencies.

The latest toll means it will be the fourth year in a row that at least 100 homicides have been recorded in London pic.twitter.com/50R8OBBHvH

​John Lloyd, an experienced murder squad detective, said he had worked on one case — the murder of eight-year-old Ayesha Ali in 2013- where it had taken 18 months to get access to the relevant Facebook evidence.

Nowadays there are custody time limits of only six months and it is sometimes impossible to get the necessary evidence from social media in time for a suspect's trial.

"The virtual world does not have any boundaries and we are going to be gathering evidence which is sitting on a server somewhere. It's an issue because of the nature of how borderless the virtual world is," Mr. Hewitt said.

Mr. Hewitt insisted they were getting on top of gang crime in London and he said the new Violent Crime Taskforce was now taking the fight to those individuals who sought to use violence.

He also pointed out, in reaction to a question about how safe London was in comparison to other major cities, that as of September 2 New York Police Department had recorded 197 homicides.

The city of Cleveland, Ohio, recently recorded its 100th homicide but it has a population of 385,000 compared to eight million in London.