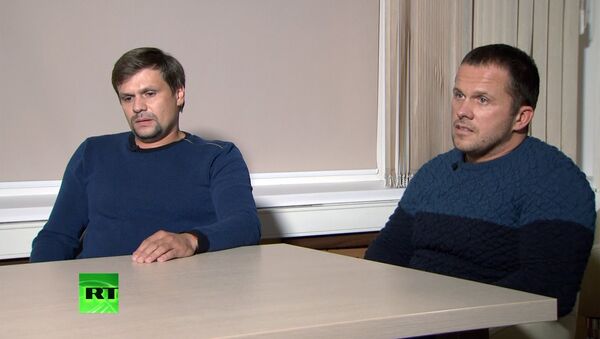 © Photo : RT
/
Go to the photo bank
Subscribe
Alexander Petrov and Ruslan Boshirov, the two suspected perpetrators of the Salisbury poisoning, spoke out in an unprecedented interview on Thursday. They shed light on their trip to the UK, which has made international headlines after British officials accused them of attempting to kill former Russian military intelligence officer Sergei Skripal.

When asked about why they decided to visit the UK, Alexander and Ruslan told Sputnik and RT editor-in-chief Margarita Simonyan this wasn't a business trip. They wanted to "cut loose" in London first and then go and see Salisbury in one day. Unfortunately, their plans were disrupted by what they called a "transport collapse" after heavy snowfalls hit the country in early March.

They spent nearly an hour in Salisbury on March 3 but got soaked and had to come back to London. "There are no photos, not a single news agency or TV channel has shown that on this day," Ruslan Boshirov said. He added that the following day, they saw the Salisbury Cathedral, nipped into a café to drink coffee, walked around and "imbibed the British gothic beauty."

The two men refuted accusations that they were serving in Russia's military intelligence service GRU and described themselves as "second-tier businessmen" working in the fitness industry. Their job was connected with sports nutrition, vitamins, micro elements, proteins, and gainers. The men detailed, albeit reluctantly, that they consulted customers on fat burning and healthy nutrition.

Ruslan and Alexander admitted to have travelled to European countries, including Switzerland, on personal and business-related trips, with goals ranging from market research to exploring how to deliver new products from Europe to Russia. They refused to go into further details over concerns that this would affect their business partners.

Salisbury Clothes Are Back in Russia

The two said they have brought to Russia the clothes they were wearing while caught on security cameras. Ruslan went on to claim that he put on the famous fleece jacket on Thursday, the same day on which he was being interviewed. They recalled that Ruslan was pictured wearing the shoes he bought in London's Oxford Street, shortly after they got wet in Salisbury on March 3.

Later in the interview, Ruslan mentioned that while on a trip to Switzerland, they shared a two-room place, refuting allegations that they shared a single bed. "It's simpler and more fun to live together; it's normal for any normal person," he said, leading Simonyan to remark that no justifications are required from them.

No Perfume for Normal Lads

The two men denied they had carried or bought a box of Nina Ricci perfume, which British police said had been used to smear the Skripals' door knob. "Wouldn't it be stupid for a normal bloke to carry women's perfume? All your items are checked when you go through customs and I think the police would have had these questions if we had had anything on us. Why would a man have women's perfume in his luggage?"

In late June, an Amesbury couple was allegedly exposed to the Novichok nerve agent after coming into contact with a sealed box of perfume they found in a charity bin. The man who found the bottle has survived; his girlfriend, who sprayed the liquid onto her wrists, has passed away in hospital. Last week, Britain's police released photos of a Nina Gucci-branded box of perfume which was allegedly used in the poisoning.

000000
Popular comments
Foreign tourists in UK beware! You may be confounded as spies attempting against Britain's national security!
alvaro.marfan
13 September 2018, 18:46 GMT
000000
ivanwa88, "Lets remember no one died and as the Skripals cant be found hidden by MI6 we cant confirm if they were even sick at all otherwise why would the Skripals be kept locked away from investigators and journalists." Exactly! However, while I agree these guys could have panicked that their little business was going to be exposed as not absolutely in line with Russian laws-- people by nature seek and use whatever legal loopholes they're afforded. As you said -- life is tough-- but if they'd skirted around a few laws-- they'd probably be fined and afterward choose the straight and narrow! But they're not dumbos-- just ordinary struggling souls, like we all are. Something likeable about them ...