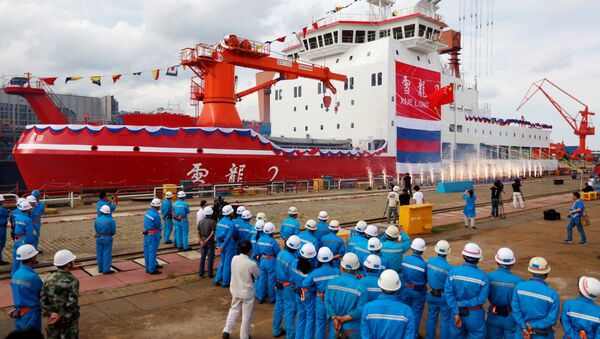 Xuelong 2, also known as Snow Dragon 2, has an operational range of roughly 20,000 nautical miles and is able to break through ice up to 1.5 meters thick at a top speed of 3 knots. The vessel can reach an overall top speed of 15 knots, according to The Diplomat.

In the upcoming months, the icebreaker, which saw its beginnings in December of 2016, will undergo several sea trials before being deployed into service sometime in early 2019. Once the ship clears all tests, it will be paired with Xuelong, its predecessor, and sent off on its first expedition to Antarctica.

Unlike Xuelong, the upgraded vessel is able to break through ice by using both its bow and stern and will be able to accomodate a crew of 90, according to China Daily.

"It will be equipped with an advanced oceanographic survey and monitoring apparatus, enabling experts to carry out research into polar ice coverage, atmospheric and environmental conditions, as well as conduct seafloor and biological resource surveys," The Diplomat reported, quoting a statement from the Jiangnan shipyard.

According to website The Maritime Executive, the ship houses both wet and dry labs, a large working deck and a moon pool that allows researchers to deploy various instruments in ice-covered seas.The ship also comes complete with a landing platform and space for a hangar large enough to fit two helicopters.

News of Xuelong 2's launching ceremony comes after it was previously reported that China has started working on a nuclear-powered icebreaker cargo vessel, the South China Morning Post reported, speculating that such a ship could lead to the creation of a nuclear-powered aircraft carrier or a floating nuclear power plant, similar to Russia's Akademik Lomonosov.

Although Xuelong 2 was designed by Finland's Aker Arctic Technology and the China State Shipbuilding Corporation, China owns the intellectual property rights to the icebreaker. Ahead of the ship's completion, Wu Gang, the chief designer of Xuelong 2, was quoted as saying that foreign partners were brought in to ensure that the building process would be "smooth."

"It's a road we've never taken before," he said. The first Xuelong was bought from Ukraine in 1994 before being refitted in 2007 and decked out with new upgrades in 2013, the Post reported.

Xuelong and Xuelong 2 are both operated by the Polar Research Institute of China, which is linked to the Chinese Arctic and Antarctic Administration, a division that reports to the Ministry of Land and Resources.

China has so far taken part in 34 expeditions in the Antarctic and eight in the Arctic, according to Marex.