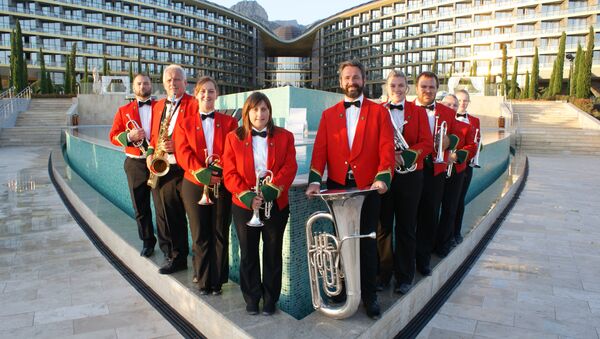 © Photo : Symphonic Brass Wales 2018
Subscribe
International
India
Africa
A number of negative messages from Ukrainian journalists, bloggers and the Ukrainian Embassy in London have been unleashed on a symphonic brass ensemble upon their return from a summer Russia tour, which included performances in Crimea.

Despite the doleful sentiment and potential "legal measures to be taken against the Symphonic Brass Wales", as announced by the Ukrainian embassy in London, the ensemble's musical director Craig Roberts told Sputnik the musicians also received numerous messages of gratitude and a warm welcome from the audiences. Mr. Roberts told Sputnik, the Ensemble is looking "forward to returning to Russia again soon."

Sputnik: Could you please tell us how the August trip to Russia came about?

Craig Roberts: Our visit to Russia this year follows on from the ensemble's visit to Moscow last May, performing in conjunction with the Victory Day celebrations and Immortal Regiment Parade there. We had a wonderful time visiting Moscow and were delighted to be invited to return to perform in Russia once again this year. 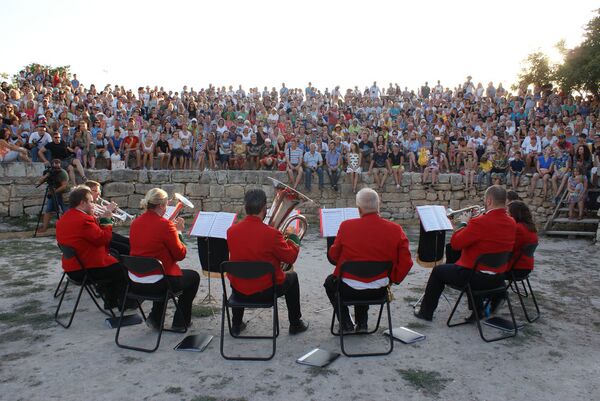 Sputnik: What was the most memorable part of visiting Moscow, Krasnodar and Crimea?

Craig Roberts: We enjoyed an incredible tour this summer, and there are so many wonderful memories which will remain with us always.

Moscow is of course a tremendous city and we received such wonderful kindness and generosity in Krasnodar, where the climate was fantastic. In Crimea, given the current political situation we had possibly anticipated a large police or military presence there. We saw none. What we did see was a busy and seemingly thriving tourist destination. We were some truly iconic historic sites during our visit there, including St. Vladimir's Cathedral and Chersonese, the Livadia, Vorontsov and Bakhchisaray Palaces, and the wonderful region of Crimea itself. What will assuredly be the lasting memories of our visit however will be the people of Crimea and their overwhelming reaction to our visit.

British, Welsh and Russian flags at the Vorontsov Palace, an historic palace situated at the foot of the Crimean Mountains
© Photo : Symphonic Brass Wales 2018

Sputnik: What was the audience's feedback?

Craig Roberts: At each of the venues we performed in, the audience reaction was wonderful. We made a point of mixing with the crowds and speaking with them after each of our concerts, and their thanks and warmth was incredible. A particular highlight for us also was the opportunity — without prior planning — to combine together and perform with a children's orchestra visiting from St. Petersburg at the Byzantine Courtyard in Chersonese, and also to meet and perform with young students from the Tavrida Youth Program. These performances and the reaction of the local people to our performances and presence in the region will undoubtedly be our lasting memories of our visit. 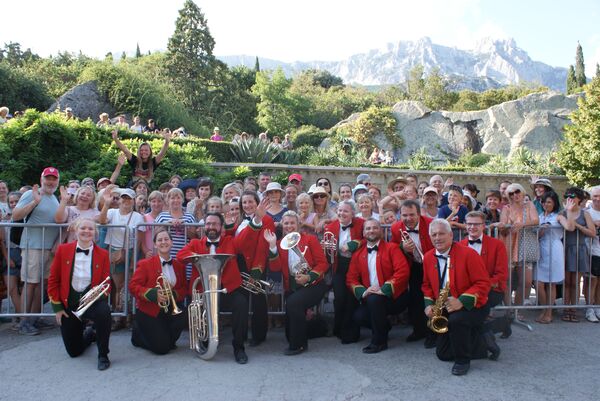 Sputnik: Tell us about your tour program?

Craig Roberts:  Our program for the tour was a mixture of music from all the different regions of the United Kingdom, plus international music in a variety of styles, ranging from classical favourites to light swing. Within the classical selection were a number of works by Russian composers of course, including Tchaikovsky, Mussorgsky and Rachmaninoff, plus we also included a number of Russian folk songs, including Polyushka Polye, Kalinka and Katyusha, the latter of which I knew was particularly popular in the region.

During our visit we were also told about the Sevastopol Waltz and were also very kindly given some copies of sheet music from the time of the Crimean Khans by the Curator of the Bakhchisaray Palace. We will certainly include some of this music and the Waltz in the repertoire for any future visits.

Sputnik: Have you faced any negative comments or feedback following your visit to Crimea?

Craig Roberts: Following our return to the U.K. we have received a number of messages, both positive and negative. The negative have been mainly from Ukrainian journalists and bloggers, while the positive have included messages of thanks from the Director of the State Palace and Department of Culture of Crimea, the Director of the Archaeological Museum and UNESCO World Heritage site at Chersonese, the Tavrida Youth Forum, and some of the young people we met during our travels. All of these individuals and institutions were incredibly grateful for our visit.

"Dear Symphonic Brass Wales, I sincerely thank you for your brave, and for us important deed, and for your art! [Your] performance in the Ancient Theater of Chersonese — the oldest theatre in Russia — was an unforgettable bright present for the guests of our museum and the residents of the city of Sevastopol. The participants of this concert will never forget your performance and improvisation with the children's orchestra from St Petersburg in the Byzantine courtyard of our museum. It was very touching and magical! Art is above politics! Art always unites us! We will be glad to see your musicians in our museum again! —  Svetlana Melnikova, Director, Chersonese Museum

We first heard from the Ukrainian Embassy in London a few days before our departure, the content of which was published on their social media accounts before we'd had a chance to respond. In the past few days, the Embassy has also now released a second statement, not to us but direct to the UK media, stating that:

"The Embassy has informed relevant Ukrainian authorities, namely the Ministry of Foreign Affairs of Ukraine and the Security Service of Ukraine, of the illegal visit of the Symphonic Brass Wales to Russia occupied Crimea. The Security Service of Ukraine is the main body to take the final decision concerning the legal measures to be taken against the Symphonic Brass Wales and its musical director Craig Roberts. We hope that the decision will be made soon. In this regard we would like to inform you that Ukraine has already forbidden some UK nationals from entering the territory of Ukraine as a result of their illegal visits to the occupied Crimea without official consent of Ukraine. Today Ukraine is at the forefront of the European security suffering from the Russian aggression. And all those who illegally visit Crimea have to realize that they are playing in hands of Russia and its hostile policy."

We made it clear 2 Symphonic Brass Wales @brasswales @croberts100 that #crimeaisukraine &illegal visit 2 Crimea will have consequences under #UA legislation. We also informed @foreignoffice about legal measures 2 be taken by UA side if visit takes place. You r blowing RU trumpet! pic.twitter.com/zn2mT0S1Jy

Sputnik: What is your response to the criticism?

Craig Roberts: Our full response to the Embassy and press can be found on our website, together with a series of images, daily reports and letters of thanks relating to our visit. As we outline there, the history of Crimea is a complex one. It was formally part of Russia from 1783, before being transferred to the UkrSSR in 1954 by Nikita Kruschev, though at the time it was of course all one Soviet Union. The population of Crimea was c.75% ethnically Russian at that time, and remains over 60% Russian (compared to less than 20% Ukrainian) today.

It's not for us as musicians to comment on the politics however. We went to Crimea to give a series of concerts for all the people of the region, and while there we hoped to also see with our own eyes the current situation, and to experience a part of the world we had not visited previously.

We thoroughly enjoyed sharing our music and culture with the people of Crimea, and also learning of the longstanding British connections there. We firmly hope that a solution to the political situation in Crimea can be found as, for all Moscow and Kiev's wrangling over the region, the people there do not deserve to be cut off from international contact and culture, and surely it is the people of the region who, in all of this, should be the most important consideration for all. 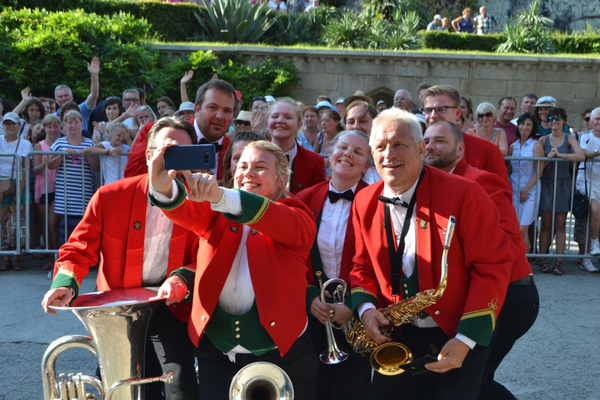 Sputnik: Are you planning to visit and perform in Russia again?

Craig Roberts: I've personally visited Russia on a number of occasions, dating back over a decade to 2007 when I was involved with the production of the first Kremlin Zoria (now known as Spasskaya Tower) Tattoo on Red Square. My own friendships with Russian people go back even further, at least 15 years, and I will definitely visit Russia again, as will Symphonic Brass Wales.

Since the reports of our visit to Crimea we have been fortunate to receive a number of additional international performances, a number of which are within Russia, and we look forward to discussing those further and to returning to Russia again soon. 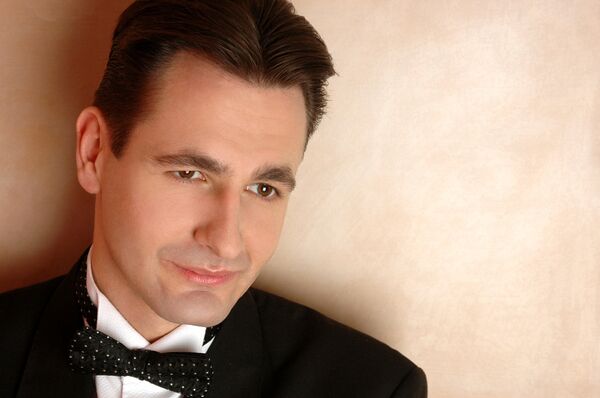 Sputnik: Is there anything else you would like to add?

Craig Roberts: Despite the suppositions of a number of the tour's critics, including the afore-mentioned journalists and bloggers, it should be noted that this visit was entirely self-funded. Each musician covered their own flight costs, while local transportation and accommodation were provided in kind by local hoteliers. No individual or organisation involved in the tour received any form of financial remuneration and all concert performances were provided free of charge.

Again, we thoroughly enjoyed sharing our music and culture with the people of Crimea, the response of whom to our performances and visit was incredible. It was a true joy for us to experience the rich culture and history of the area, and to meet the local people there, many of whom we will be maintaining contact and ongoing friendships with. This is the benefit and end result of people of different cultures and nations coming together through the arts.