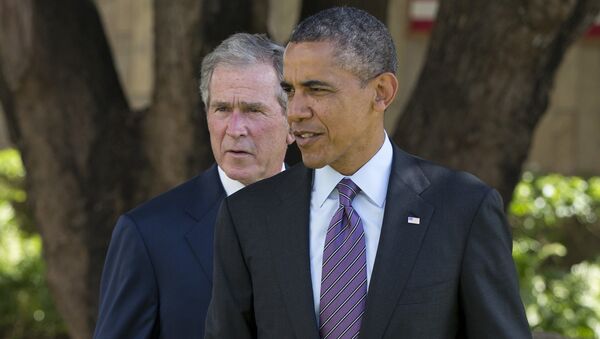 © AP Photo / Evan Vucci
Subscribe
The Pentagon estimates that the cost of war since the fateful terror attacks on 9/11 rounds out to $1.5 trillion, yet experts maintain that this figure wildly underestimates the true financial burden of perpetual war.

"After 16 years, should the taxpayers of America be satisfied we are in a ‘stalemate?' I don't think so," the late Sen. John McCain said in 2017.

The Pentagon's $1.5 trillion figure purports to cover the time period from September 11, 2001, until March 31, 2018. While this may seem like a large sum of money, it's only about twice the 2017 Pentagon budget of $700 billion. About $1.5 trillion might be a reasonable ballpark estimate for war spending in the past few years, but to suggest it as the gross cost of 17 years of bombings; costs per hour to fly military aircraft; supplies for personnel overseas; costs of lost, damaged and stolen equipment; soldier pay; and more is almost an offense to reason.

Literally 10 years ago, in 2008, Harvard's Linda Blimes and Columbia University's Joseph Stiglitz found that the cost of the Iraq and Afghan conflicts alone totaled $3 trillion. And now the Pentagon would have credulous news outlets like CNBC believe that 17 years of endless wars in the Middle East and South Asia have run a tab of a mere $1.5 trillion.

The "Costs of War" study by Brown University's Watson Institute for International and Public Affairs estimates that from 2001 to 2017, Congress appropriated $4.35 trillion for war and war-related expenses. Moving through fiscal year 2018, that figure surged to $4.6 trillion. Both figures, as Brown's report authors note, do not take into account future expenses for medical and disability coverage for veterans of the Global War on Terror, which the study forecasts will cost $1 trillion.

The Pentagon study tracks just three areas of spending: "war-related operational costs," such as training, operating tempo, base support and equipment maintenance; "support for deployed troops," including food, clothing and medical treatment for troops currently overseas; and "transportation of personnel and equipment."

So what's included in Brown's study that is absent from the DoD report?

For one, Brown's study includes spending on the Department of Homeland Security. DHS was set up under then-President George W. Bush's administration in November 2002 as part of the Homeland Security Act. Brown's report states that spending on DHS for "prevention and response to terrorism" adds up to about $783 billion since the inception of the department.

Further, Brown accounts for the cost of financing required to undertake Overseas Contingency Operations, or OCO. Since the Pentagon borrowed incredible sums of money to pay for the war, the department had to make interest payments. "Estimated interest paid on OCO borrowing for wars [from] FY [fiscal year] 2001 to FY 2017" comes out to $534 billion, Brown's Watson Institute reported. When interest on loans for war operations in 2018 is factored in, that $534 billion figure shoots up another $88 billion.

Another factor accounted for by the Watson Institute and excluded by DoD is how much money the base Pentagon budget grew in 2018 "due to post 9/11 wars," which adds another $33 billion to Brown's total figure of $5.6 trillion — or about 25 percent of annual US GDP.

In its addendum, Brown's Watson Institute notes, "[c]umulative interest on war appropriations through FY 2013 is currently estimated to add more than $7.9 trillion to these totals by 2056."

Thus, Brown's estimate adds up to $13.5 trillion — nine times more than DoD's estimate. Perhaps for this reason, Blimes has dubbed these wars the "credit card wars."

US Military Supply Woes: 'DoD Has Never Been Able to Mount an Effective Audit'

To conduct the "Costs of War" study, the Watson Institute gathered together an international team of 35 scholars, activists and legal experts. The study examined costs associated with US wars in Iraq, Syria, Afghanistan and Pakistan, as well as post-9/11 veterans' care and homeland security.

It's important to note a few things about the Pentagon's study. First, the Pentagon has a conflict of interest in auditing its own war-related spending; the department thrives on ever-growing budget allocations from Congress.

Further, the Pentagon has been unable to keep track of incredible sums of money. It has never conducted a complete audit, but that is supposed to change. A year ago the Pentagon agreed to an audit to track the Pentagon's several hundred billion dollars in yearly expenditures. But military financial managers found themselves on the hot seat after sharing the mammoth $1 billion cost it would take to check the Pentagon's books, Government Executive reported this year.

In February, the Pentagon's Defense Logistics Agency was unable to tell auditors from Ernst & Young where $800 million for construction projects had gone, Sputnik reported. In January, the Project on Government Oversight reported that some $675 million had been squandered on economic development projects that were intended to help rebuild Afghanistan.