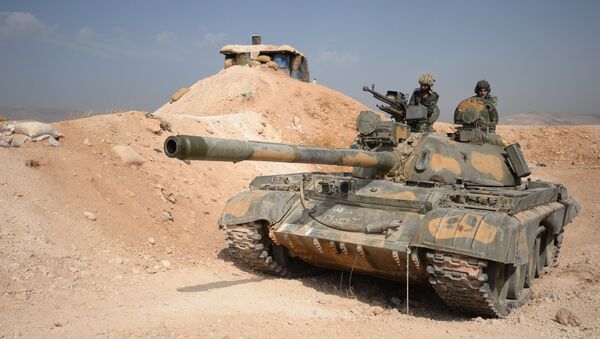 With the Syrian Army continuing to amass troops and military hardware in southern Idlib, militants occupying the province are seemingly beginning to panic, warning Ankara against giving Damascus the greenlight to launch its long-awaited offensive in northwestern Syria.

A militant from an unspecified group stationed in Idlib has issued a threat to Turkish President Recep Tayyip, warning that militants in northwestern Syria have dug a tunnel stretching into Turkey’s Hatay province.

He went on to explain that in the event of Erdogan “selling Idlib”, militants will use the tunnel to cross into Turkey, to potentially carry out attacks against civilians and security forces.

"Reyhanli [a town in Hatay province] is behind me. As you know, us [militants] from Ghouta are good are digging and since you’ve built a 960-kilometer border barrier… We want to tell you: if you sell Idlib or other opposition-held areas, we’re going to buy Reyhanli from you. I won’t give you more details, but this is your warning,” the militant said in video footage circulating on social media.

The video was published just days after a trilateral summit in Tehran, attended by Russian President Vladimir Putin and his Iranian and Turkish counterparts, to discuss the situation in Idlib, ahead of the Syrian Army’s impending offensive.

Syrian Army Doesn't Need Permission from US to Attack Terrorists – MFA Source
Although the presence of Turkish forces in Idlib could complicate Damascus’ plans to retake the province and risk direct military confrontation between Turkey and Syria, the Syrian government has insisted it will liberate Idlib even if Erdogan does not withdraw his forces.

Wary of the recent summit, the militant is seemingly warning Erdogan against pulling out of Idlib and withdrawing support to the various Islamist militant groups in the Idlib Governorate.

The area is the last major bastion for non-SDF militants and its liberation by government forces would further cement the Syrian government’s victory over terrorists and the survival of Syria as a secular state.