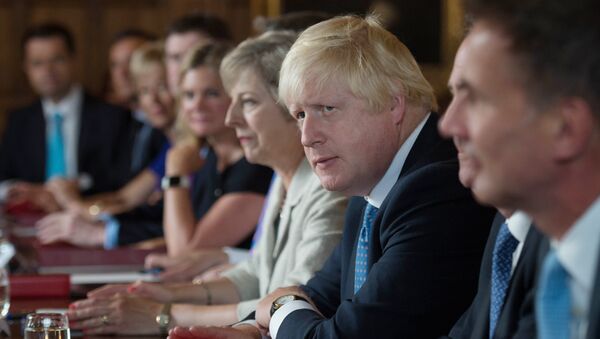 The former UK Brexit minister has warned that up to 80 Conservative MPs are poised to vote against PM Theresa May's Chequers proposal. This comes as Boris Johnson wrote in an op-ed that May has “wrapped a suicide vest around the British Constitution and handed the detonator to Brussels” and that the deal opens the country to political blackmail.

Sputnik: What do you make of this latest row over Boris Johnson’s remarks and him referring to Mrs. May’s plan as “wrapping a suicide vest around Britain and handing the detonator to Brussels”? He has received quite a bit of criticism from senior Tories.

Andreas Bieler: That’s correct, and I think that there are two issues in relation to these remarks. On the one hand, it’s again a very inflammatory way with which Boris Johnson has chosen to make his point. A lot of senior Conservative members of the party made it very clear that they find this reference to a suicide vest highly inappropriate. The other issue is that it does reflect a deep split within the Conservative Party over how to position themselves vis-à-vis Brexit, especially these tensions around the so-called Chequers plan, which is not accepted at all within the Conservative Party.

Sputnik: Mrs. May has been warned that she has until the annual conference of the Conservative Party later this month to drop her Chequers plan or she would face a "catastrophic" split in her party. What do you make of that timeline that she’s been given? We also know that Barnier is not happy with the Chequers plan either; he even called it illegal, saying that even if they wanted to, they couldn’t, because it’s illegal.

Andreas Bieler: It’s quite interesting because there’s, of course, a domestic British dimension and that affects especially the governing Conservative Party. Then there’s also a dimension between Britain and the EU. In the UK, within the Conservative Party, they clearly cannot agree on a joint position vis-à-vis the European Union. What is often overlooked when people assess these kinds of divisions is that at best, the Chequers plan can be an opening point of the negotiations process. Because that Chequers plan, as it is, has not been accepted by the EU at all. Perhaps some of the criticism against the Chequers plan by the Conservative Brexiteers is also due to the fact that they know that in the process of negotiations, there would be further changes and they are worried that that would further undermine what they consider to be the best position on Brexit.

Sputnik: Do you think that the Chequers plan in itself is a half-empty cup, or is it half-full and just needs to be further tuned to the needs of Theresa May’s own domestic politicians and also to the EU? You said that it could actually be seen as the opening to a conversation; are there any good things in that Chequers plan that are viable and could be expanded upon?

Andreas Bieler: It’s a very careful balancing act in order to try to bring the various constituencies in her party together. There’s a strong emphasis on the fact that there would be no further freedom of movement after Brexit, because this is where a lot of rather right-wing Conservatives come from; they’re unhappy about this rule of free movement within the EU. The Chequers plan argues, delivers on that. To one extent, she tries to pass it via her right-wing critics, and on the other hand, it tries to keep open the flow of trade between the UK and the continent.

So, as a result, we have this kind of joint jurisdiction between the European Court of Justice and UK courts, and that’s where some Brexiteers say “That means that we still have to listen to the European Court of Justice,” but that’s a matter of interpretation. And there’s this idea of a facilitated customs arrangement in Ireland between the Republic of Ireland and Northern Ireland; some people say that it’s technically not feasible and what will happen if that becomes apparent, the only way that can work then is that there’s an extra tariff barrier across the Irish Sea and between Northern Ireland and the rest of the UK. And again, Brexiteers wouldn’t find that acceptable.

Sputnik: Can you tell us about the difference between the Chequers plan and what’s known as “the hybrid model” or a customs partnership? That would allow for the trade of goods between the UK and Europe without the need for checking customs, because basically, the UK would collect the EU tariffs on the goods coming from other countries on behalf of the EU. That would actually solve the Irish border question as well. Is that being looked at still? Is anyone interested in that? What are the problems with the customs partnership or the “hybrid model”? Could that become a solution and how does that differ from what she’s proposing in Chequers?

UK Would Vote to Remain in EU in Fresh Brexit Referendum – Poll
Andreas Bieler: I would see that as part of the facilitated customs arrangement mentioned in Chequers, but it is also discussed separately. I think that there are huge questions over the technical feasibility of this kind of solution. They would have to have special cameras at the border, which would then identify what kinds of goods are being transported and for which purpose. As a result of that, because you can capture that at the border, you wouldn’t need a concrete check at the border between the Republic [of Ireland] and Northern Ireland. It’s just a question of the technical feasibility of this kind of arrangement and that’s why that has been a bit muted recently.