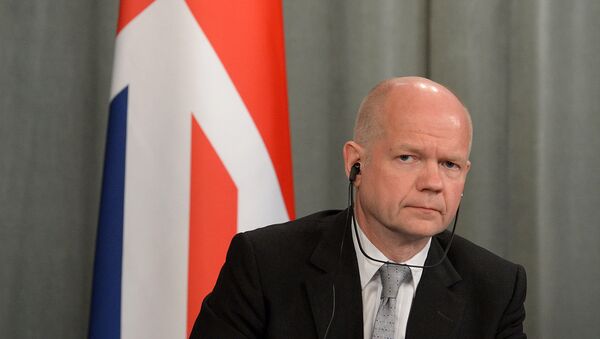 Former British Foreign Secretary William Hague has warned that the UK faces the prospect of the “most serious constitutional crisis” in over a century if the Chequers deal is blocked by MPs.

Writing in the Daily Telegraph, Lord Hague insisted that Brexit is not the only thing at stake, urging politicians not to present UK Prime Minister Theresa May with an ultimatum.

"It would be no exaggeration to say this would be the most serious constitutional crisis in Britain for at least one century, possibly two," Lord Hague wrote in his Daily Telegraph column on Tuesday.

"It is worth thinking about (the various scenarios) because everyone in Parliament who is enjoying making categoric statements about being against Chequers or against 'no deal' is now loading the revolver for a game of Russian roulette, with a lot more than Brexit at stake."

May Could Face 'Massive Problem' as 80 Tories Ready to Bury Her Brexit Plan
His comments came after former Brexit Minister Steve Baker claimed that up to 80 MPs are prepared to vote against PM May’s Chequers plan in a parliamentary vote to take it off the table, potentially giving impetus to a leadership challenge against the prime minister.

Even without MPs directly blocking the Chequers proposals, it is unlikely the plan will actually be used as the basis of an eventual deal, with EU Chief Negotiator Michel Barnier describing it as “not workable” and a number of UK politicians describing it as “dead.”

May’s Chequers plan has been unpopular and staunchly opposed by many politicians, including members of the ruling Tory Party, since its inception, with Boris Johnson and David Davis resigning from their respective cabinet positions in July over the deal and the prime minister’s wider Brexit strategy, claiming she was giving too much away.