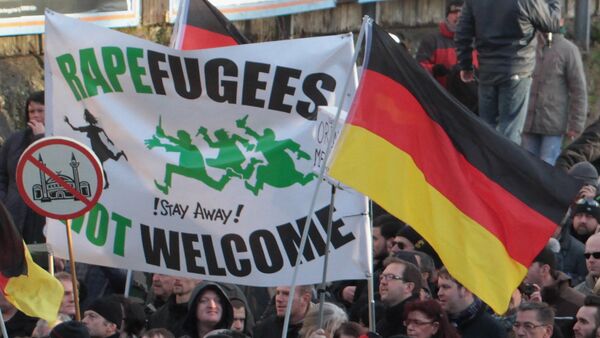 The rise of right-wing parties in Europe ahead of the 2019 European Parliament elections may upset the established balance of power within the bloc, Serbian historian and political scientist Sasa Adamovic told Sputnik, foreseeing a fierce political struggle between globalists and their opponents.

An anti-Brussels axis formed on the basis of resistance to the EU immigration policy has emerged in Europe and may dramatically affect the bloc's future, Serbian historian and political scientist Sasa Adamovic told Sputnik.

"Its formation was facilitated by close cooperation between the countries of the Visegrad Group, who had a well-articulated anti-immigration position from the very start and who refuses to fulfill [immigrant] quotas imposed by Brussels," he explained.

The political scientist noted that the anti-immigration movement is gaining pace in the EU. In Central Europe, Heinz-Christian Strache's Freedom Party of Austria (FPO) gained 11 seats in the 2017 Austrian legislative elections in October 2017. Additionally, Sebastian Kurtz, the incumbent chancellor of Austria and chairman of the Austrian People's Party (OVP), is also well known for his conservative and anti-immigration stance, the political scientist underlined.

"Significant political changes have also occurred in Italy, and this is a country of exceptional importance for the EU," Adamovic pointed out. "Two parties opposing the European establishment came to power, and the Lega Nord of Interior Minister Matteo Salvini is clearly against immigrants. According to recent opinion polls, this party commands the greatest support among Italian civilians."

How Eurosceptics Won the Day in Italy and Outplayed George Soros
He noted that right-wing parties were also gaining ground in northern Europe: In Sweden and Finland the anti-immigrant Swedish Democrats and Finns Party have raised their voices against Brussels' approach to the refugee dilemma.

During the September 9 general elections in Sweden, the Swedish Democrats won 17.6 percent of the vote.

In Germany, the Christian Social Union (CSU), the long-standing ally of the ruling Christian Democratic Union (CDU), distanced itself from its partner with its anti-immigration rhetoric, while German Chancellor Angela Merkel's refugee policy has prompted criticism and protests among the country's civilians, the political scientist emphasized.

However, Europe had already seen the rise of anti-immigrant parties before, he remarked, referring to the Dutch nationalist Party for Freedom led by Geert Wilders and Marine Le Pen's National Front.

"There is a growing wave of resistance to Brussels policy that has brought more than a million immigrants to Europe," Adamovic stressed. "And what is important is that this trend is gaining momentum shortly before the elections to the European Parliament, which are due to take place in May 2019. If the situation develops in the same direction, we will see a powerful group of anti-immigration politicians in the European Parliament, which cannot but affect the policy of Brussels, in general, and the policy of open borders, in particular."

Hungary to Protect Borders, Stop Illegal Migrants, Stand Up to EU If Needed - PM
According to the historian, if the immigration flow is not stopped, it will lead to a change in the political priorities of many EU countries. He believes that the European Union is losing its bearings and that the clash between globalists and their ideological opponents will continue to escalate.

"They [globalists] created so many problems for the European Union and brought it almost to the brink of the abyss," Adamovic said. "Perhaps, the time has come to change political elites, the time of parties that have a better understanding of national and pan-European identity. This brutal political struggle will unfold in the European Parliament, and the example of Germany indicates that (the possibility) cannot be excluded that it will spill out onto the streets."

The EU's official immigration policy has come under criticism from both European civilians and government officials. On September 5, Hungarian Minister of Foreign Affairs and Trade Peter Szijjarto stated at the international economic forum in the Polish city of Krynica-Zdroj that he did not share the views of the "liberal European mainstream" on immigration.

"Europe achieved its great successes thanks to the system of Christian values," Szijjarto stressed, adding that "the more we distance ourselves from these values, the smaller the chance that we can restore a competitive and strong European Union."

In his speech, Szijjarto mentioned that the EU was facing the problems of immigration and energy policy, as well as terrorism and the challenges posed by Britain's withdrawal from the bloc.

"Would we be anti-European if we regarded those whose opinions differ from the current EU mainstream as the enemies of the EU?" the minister asked rhetorically.