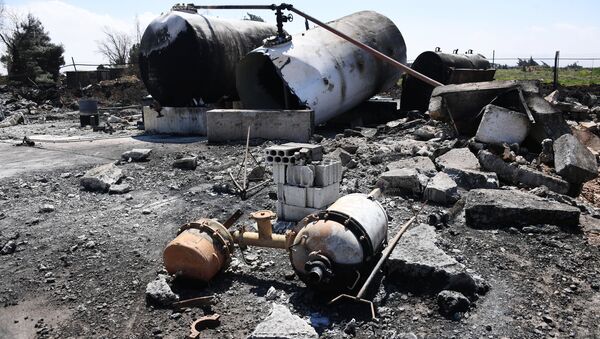 Sputnik talked to a member of the Virginia State Senate Richard Black shortly after his visit to Syria and asked him to share his views on the situation in the war-torn country, the reported chemical attacks, a possible offensive on Idlib and Washington's policies in the Middle East.

"The CIA, working together with British intelligence, has repeatedly used the terror weapon to overthrow nations. Our goal is to install a puppet regime. If we had succeeded in Syria today, Al-Qaeda or Daesh [ISIS] would be running Syria from Damascus and the dreaded black and white flag of Al-Qaeda would fly over the capital. I don't think this is what the American people want. I would say that the worst thing about American foreign policy is that it is deeply entrenched in our foreign policy to use terror as a weapon."

About Upcoming Op in Idlib

"You know that the Syrian army has recaptured almost all of Syria and there is a pocket of ultra-extreme radicals in Idlib. The people in Idlib live under a domination of these very vicious jihadists."

"If the US were to intervene on the side of the rebels in Idlib, we would be fighting shoulder to shoulder, alongside Al-Qaeda, the same group that attacked the Twin Towers and the Pentagon on 9/11."

"The president's [Bashar Assad] desire is to limit the bloodshed as much as he possibly can. This has always been his policy throughout the war, unlike when we attacked Mosul and Raqqa and just carpet bombed and indiscriminately killed everyone who was in those cities. They don't do that in Syria because they are liberating the people."

"In Douma, there is a very strange situation that has never been disclosed in the media. British intelligence began warning several weeks earlier that there was going to be a gas attack in Douma, that the Syrians were going to carry it out. And the Tiger Forces of the Syrian army launched an attack from an unexpected direction and they captured the chemical laboratory that the rebels had intended to use to stage the gas attack; that they would blame on the Syrian government. The terrorists gave up and the battle progressed; finally the rebels had to surrender. And they staged a false gas attack. There never was a gas attack in Douma."

"No American journalist has ever asked if Syria had gas in the first place. If they were so desperate to use gas, why don't they use it against the terrorists?"

"There are 50,000 terrorists in the province of Idlib. Why do they always use them against women with baby strollers and old men? There is no answer to it. It's irrational. No rational person would believe that this was possible."

Chemical Weapons Provocation in Syria to Start September 8 - Russian MoD
"It appears as though British intelligence, MI6, will carry out a staged gas attack; they have already chosen a location that has been disclosed. They have trained people to fake as if they were victims of gas."

"Now it's been disclosed and they may change their plans. We may see a different scenario. But I think it is very likely that there will be air attacks on the Syrian army; then we will be in a close total alliance with Al-Qaeda that attacked the US and murdered 3,000 Americans on 9/11."

"They know if they used poison gas, if they really did it, it would probably provoke an invasion by the West. Syria understands it. They have absolutely nothing to gain, everything to lose. Each one of these so-called poison gas attacks has been debunked by very credible investigative journalists."

READ MORE: US Will Do Whatever It Takes to Stop Assad From Freeing Idlib — Syrian General

About US Sanctions Against Syria

"If we get rid of the sanctions, it would make it so much easier for the refugees to return. We did talk about the refugees and President Assad made it quite clear: he wants all Syrians to return to Syria. The main power is the power of a nation. The Syrians are very intelligent, very hard-working. He wants them back."

About Assad's Popularity in Syria

"You asked about how he is portrayed in the media. People in Syria know that he is a very humble individual. There is almost a touch of shyness about him. Incredibly intelligent and very devoted to his people."

Trump Wanted to 'F***ing Kill' Assad After 2017 False Flag Chem Attack – Reports
"He doesn't have an imperial presidency like we have and many Western countries have. When he suddenly goes to a religious ceremony, whether it's for the Muslims or the Christians, he drives himself, in his own SUV. He doesn't have an escort and people love him for this."
"There has never been one attempt on President Assad."

"And he says: if the Syrian people wanted me out, soldiers would march in one day, they would say: Mr. President, it's time for you to leave, pack up your things, we are going to escort you out; you are no longer the president. And he would say: I accept that, it's the will of the people."

On US Intervention in Libya

"What were we attacking Libya for? They never attacked anyone. And that led to the fact that we were capturing Libyan weapons so that we could ship them to Turkey and use them to stage an invasion of Syria."