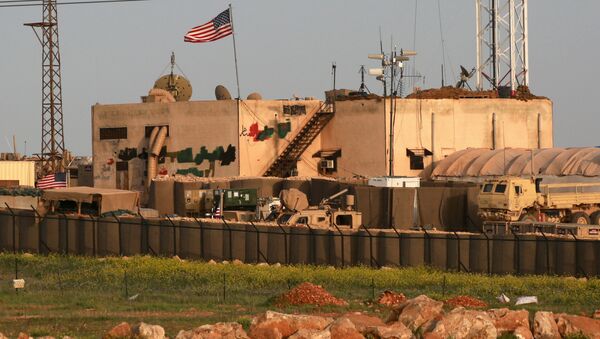 Media reports that surfaced earlier have suggested that the US has also reinforced its al-Tanf military base in southeastern Syria amid allegations that Moscow had warned Washington about planned strikes against militants in the region.

On September 10, the Fars News Agency reported that the US sent two convoys consisting of ten trucks loaded with logistics and military equipment to the country's al-Susah base in the eastern part of Deir ez-Zor province, controlled by Syrian Democratic Forces (SDF). The media platform said, citing local sources that Washington had also sent another convoy consisting of 100 trucks loaded with military equipment from Iraq to unspecified Syrian territories controlled by the SDF, via the Simalka border crossing.

Task & Purpose previously reported that the US had sent over 100 US Marines to reinforce the military base in al-Tanf, Syria. Newly deployed forces will take part in live ammunition military drills, which are being conducted to demonstrate the "capability to deploy rapidly, assault a target and conduct rapid exfiltration," according to US Central Command (CENTCOM).

CNN earlier reported, citing an anonymous insider, that the drills are a US response to alleged warnings by Moscow that it plans to launch precision strikes against militants located near the al-Tanf base. According to the media outlet, Washington will use "necessary and proportionate force" to protect itself and its allies.

The reinforcement of US bases in Deir ez-Zor comes amid tensions between Washington and Damascus regarding a planned military operation in Idlib province against militants. US President Donald Trump has warned his Syrian colleague against attacking the province, claiming "hundreds of thousands of people" may suffer. The White House promised to respond "swiftly and appropriately" in case Damascus uses chemical weapons. Moreover US ambassador to the UN Nikki Haley claimed Washington "knows exactly" who is going to use chemical weapons in Syria.

Russia's Defense Ministry has warned Western countries about terrorists in Idlib planning provocations with the use of chemical weapons. Moscow has presented the underlying proof for that to the UN and OPCW. Russia believes the militants will try to accuse Damascus of committing a false flag attack in order to force the West to launch airstrikes against Syrian forces.