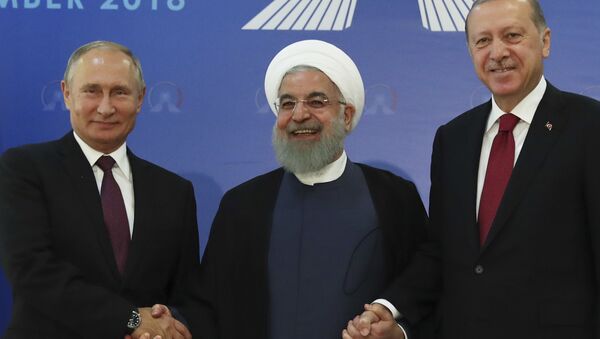 Ivan Danilov
All materials
The recent trilateral summit on Syria would have been unthinkable a couple of years ago. However, Donald Trump did his best to make it happen by pushing Erdogan and Rouhani into an an-hoc alliance with Russia.

On Friday the presidents of Russia, Iran and Turkey gathered in Tehran to shape the future of Syria and arguably the entire Middle East. The relationships between the three countries have often experienced bouts of instability and even hostility, but now the differences are set aside in order to fight against the common threat of Western-sponsored terrorism. It can be argued that the threat of terrorism alone wouldn’t have been enough to bring Iran, Russia and Turkey together, but the Trump administration basically ensured the inevitability of cooperation between the countries by imposing simultaneous sanctions against them. Nothing bring former adversaries closer than a common problem.

The joint statement made by Putin, Erdogan and Rouhani after the Tehran summit underscores three basic principles that define their common view on the Syrian conflict. The first principle is that any solution to the Syrian crisis must respect the sovereignty and the territorial integrity of Syria. Second principle: the terrorist organizations that are present in Syria must be destroyed. Third principle: there is no purely military solution for the Syrian crisis because there can only be a political one. Although there are some divergences on the technical aspects, like the “Idlib truce”, the existence of a common strategy is undeniable and this strategy leaves no room for US presence in Syria. The Trump administration could have easily gotten itself a place at the negotiation table, but Trump chose to appease the warmongers from the Democratic Party and the hardliners from his own team, opting to employ missile strikes instead of diplomacy. The consequences of this policy will be far-reaching and will not be confined to Syria.

Cornered Rats. What to Do?
To understand the extent of those consequences let’s take a look at the preparations to the Tehran summit that were largely ignored by the mainstream American media because they chose to focus their attention only on the Syrian issues.

On September 6th a group of high-ranking members of the Iranian parliament, led by the speaker of the Parliament Ali Laridjani, visited the Russian city of Volgograd to meet the representatives of the Russia State Duma (the lower House of the Russian Parliament) led by the speaker Vyacheslav Volodin. For obvious reasons, the meeting was seen as a preparation for the presidents’ meeting in Tehran, but the agenda of the meeting itself shows that Russo-Iranian ties span far beyond cooperation in Syria. Mr. Laridjani openly said that one of the items to be discussed is the “oil issue” and that alone should be matter of serious concern for Washington.

Probably, the “oil issue” is a reference to an “oil for goods” swap agreement between Russia and Iran that can (and probably will) be used to bypass the sanctions reimposed on Iran by the Trump administration. The framework “oil for goods swap” agreement was signed in 2014 and then extended for 5 years in 2018. The scheme of the swap is basically a sanction avoidance mechanism: Russia takes the Iranian oil and “pays” for it with Russian produced food, machinery and mining equipment. Given that no dollars are used for the transaction, the whole scheme can’t be stopped by the US Treasury Office of Foreign Assets Control. For Moscow, the swap gives it control over a greater share of the international oil market and the possibility to sell a considerable amount of Russian goods in Iran. According to PressTV, the tentative amount of the swap is set between 300 and 500 thousand barrels per day.

To put things in perspective that's the equivalent of between 72% and 120% of Iranian oil exports to India (in July 2017) which is one of the biggest buyers of Iranian oil.

Bypassing the dollar in oil trade is a threat to the whole petrodollar system. Russia is using the current window of opportunity to extend the international use of the Russian Ruble. During the same meeting Mr. Volodin said that most of the trading between Russia and Iran is already done in rubles. If the current trend continues the ruble can become a sort of "dollar for the sanctioned countries". Of course, the volatility of the ruble may be an obstacle to that, but for sanctioned countries like Iran (and maybe Turkey) the lack of political risks associated with the use of ruble may far outweigh all other considerations.

The most important aspect of the inter-parliamentary negotiations is the “coordination of legislative efforts” between Russia and Iran. According the Russian media, the whole point of the Russo-Iranian legislative coordination is to facilitate the implementation of a free trade zone between Russia and Iran, while speeding up the negations for Iran’s possible inclusion in the Eurasian Economic Union, an economic integration format created in 2014. Current members of the EEU are Russia, Kazakhstan, Belarus, Armenia, and Kyrgyzstan. The Government of Turkey has also shown some interest in integration with the Eurasian Economic Union.

Putin: Terrorists in Syria's Idlib Preparing Provocations
Of course, the integration process (if it’s not derailed by some unforeseen events) is likely to take years, but Washington’s pressure on both Ankara and Tehran makes regional integration with the Moscow led EEU an appealing option for both Erdogan and Rouhani. The Eurasian economic union, combined with Iran and Turkey will be a tremendous economic, political and even military force, with a huge internal market, exceptional oil and gas reserves, and tremendous logistical value because it will control vital transport routes between Europe and Asia. Russia is obviously interested to expand its economic projects in the region and is trying to gain maximum advantages from the fact the West basically defaulted on its promises to both Iran and Turkey. While the western analysts and diplomats think that the whole political process in the triangle Moscow – Tehran – Ankara is all about Syria or at worst all about some oil projects, the reality is that Putin, Rouhani and Erdogan are creating a new form of regional cooperation that excludes the American influence from the Middle East.

There will be common diplomatic efforts on Syria and common oil and gas projects, but as the Speaker of the Russian parliament said, “we mustn’t restrict ourselves to existing infrastructure projects” because the ties between the countries go deeper than that.

On September 4th President Donald Trump demanded that Syria and Russia refrain from attacking the last major terrorist stronghold of Idlib. On September 5th the Russian Ministry of Defense published a video showing a Russia aerial attack against terrorists in Idlib. The US State Department repeatedly asked Turkey to refrain from purchasing the S-400 Russian anti-aerial defense system. Turkish Defense Minister Nurettin Canikli slammed the US demand, hinting that Ankara will likely go ahead with the deal. American attempts to force a regime change in Tehran have failed repeatedly. Even if the Trump administration decides to order another missile strike against the Syrian army, the outcome of the war in Syria is more or less settled. All of the above show that the American influence in the region is waning, while the influence of Russia, Iran and Turkey is growing. Listening to the Beltway warmongers is a losing strategy for Trump.

The more hostility Washington shows against other countries, the more coordinated will be their efforts to keep the US out of Syria and even out of the Eurasian continent. The summit in Tehran won’t the last one. Vladimir Putin invited the presidents Turkey and Iran to Russia for the next summit, and it is a safe bet that while Syria will be on the agenda, the issues of regional economic and security cooperation will be discussed as well. Trump certainly never wanted to sow the seeds of cooperation between Russia, Turkey and Iran, but he did exactly that. If he really wanted to isolate Iran and punish Russia, he got everything wrong, even if is not evident right now. It is ironic that the mistakes of the American warmongers will eventually lead to a peaceful Syria and a peaceful Eurasia.

The views and opinions expressed in this article are solely those of the author and do not necessarily reflect those of Sputnik.
Newsfeed
0
Access to the chat has been blocked for violating the rules . You will be able to participate again through:∞. If you do not agree with the blocking, please use the feedback form
The discussion is closed. You can participate in the discussion within 24 hours after the publication of the article.
To participate in the discussion
log in or register
loader
Chats
Заголовок открываемого материала