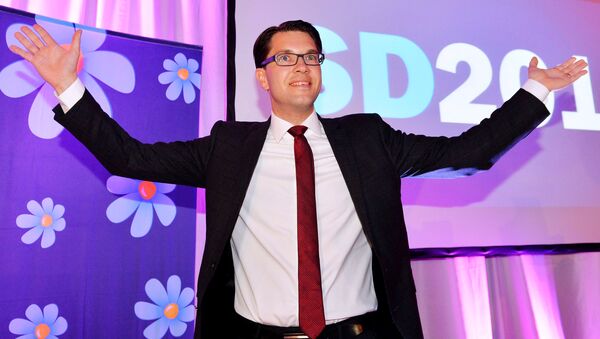 Neither of the two big blocs has managed to win a convincing victory in the Swedish election, putting right-wing Sweden Democrats, the third-largest party, into a position of power.

The general election in Sweden has resulted in drama, with a single seat dividing the "red-green" bloc and the center-right block vying for power. Following major electoral gains by the right-wing Sweden Democrats (SD), their leader Jimmie Åkesson has declared his party the real winner of the election.

With data from 6,002 of Sweden's 6,004 election districts processed, the left-wing bloc led spearheaded by the Social Democrats won 40.6 percent of the vote, as opposed to the 40.3 percent of the opposition Alliance led by the Conservatives. Despite the overtly negative media coverage by Swedish mass media, the right-wing Sweden Democrats have improved their result from 12.9 percent in 2014 to 17.6 percent this year, national broadcaster SVT reported.

Sweden Democrats Leader Says Ready for Talks on Gov't Formation With Opposition
Although their actual performance was somewhat weaker than many anticipated following pre-election surveys, where the party polled up to 25 percent and over, Sweden Democrats leader Jimmie Åkesson was cheerful when he called the SD a "swing party" and challenged Conservative leader Ulf Kristersson, whose election promise was to "change the government."

"Now it's really time to back up your promise, Kristersson, how exactly are you going to change the government? Will you choose [Social Democrat leader] Stefan Löfven or Jimmie Åkesson?" the SD leader inquired.

He also stressed that his party would vote only for a government that listened to its demands.

"If someone wants power in the government, they have to take us into account," the politician noted. — We have a pre-election manifesto and, as a starting point, the list of priorities that we worked on since the spring. We will vote against all governments that don't give us influence. "

Åkesson concluded that he himself and his party have "done everything they could" and stressed that they "have nothing more to give."

"Now we are going to get some influence over Swedish politics," he said.

Calls for government to step down

Conservative leader Kristersson, who earlier fervently brushed aside the idea of cooperating with the Sweden Democrats, has called on Prime Minister Stefan Löfven to step down.

"This government is done for. It should never have taken shape in the first place. Now it will leave," Kristersson said.

Responding to these calls, Löfven said he would "calmly work" during the two weeks left until the opening of the Swedish parliament. While stressing the need for cross-party cooperation, he nevertheless declared the "funeral of bloc politics."

"It is a humble recognition that no party can lead Sweden alone. Those who want to improve Sweden must gather all the good powers and do it together," Löfven declared, pledging that the Social Democrats will continue standing by their values despite the recent election catastrophe, which proved to be their worst in decades.

The Christian Democrats (KD) proved to be yet another surprise winner in the 2018 election. Despite having continuously polled below the four percent threshold, the KD managed to garner an unexpected 6.4 percent.

The Green Party, on the other hand, was arguably the largest loser of the election. In recent years, the party has seen a dip in popular support from over 15 percent in the 2014 European parliament elections to barely four percent in the 2018 general election.