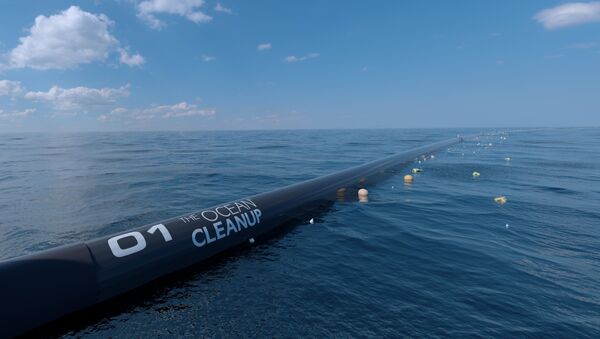 A ship departing Los Angeles on Saturday is carrying a giant floating tube which company researchers claim will help to clean plastic pieces spread throughout the ocean, the Guardian reports. The Ocean Cleanup has been in the planning stages for several years and is now testing its technology on the open sea.

The first test launch was made on Saturday with the ship deploying System 001 tubes in the San Francisco Bay. The tubes were set to be in a U-shaped form, the better to contain and retrieve floating plastic garbage. A 9-foot skirt beneath the tubes stops plastic bits from floating away but allows wildlife to travel below.

The efficiency of the Ocean Cleanup system is on track to be detailed after a test run of some 6 weeks, after which a support will rendezvous with the collection vessel to retrieve collected pollutants.

Ocean Cleanup is currently a small nonprofit organization founded by a Netherland's resident Boyan Slat. At the age of 18, Slat proposed the cleanup the Great Pacific Garbage Patch – a floating mass of plastic bits and pieces of garbage said to be twice the size of Texas. If it can swell to a fleet of 60 devices like System 001, Ocean Cleanup says that it could remove at least 50 percent of the Great Pacific Garbage Patch in five years, and 90 percent of ocean trash by 2040.

Aerial shot of Wilson. Technology on course for launch. pic.twitter.com/5L85PZBlaS

To gather funds the company launched a crowdfunding campaign in 2013, which raised $35 million in donations since that time, according to CNBC. The funds allowed the testing pf 270 models and six prototypes before the creation of System 001.

The Ocean Cleanup attracted the attention of environmental and tech companies, including tech star Elon Musk, who tweeted that he found the idea of System 001 “cool.”

Environmental activist group Greenpeace noted that while the idea is “laudable,” it deals only with consequences and does not address the root cause of the problem: the widespread and thoughtless oceanic pollution practised by mankind.

“Prevention is far better than cure and in order to tackle the pollution crisis corporations must stop producing so much plastic,” a Greenpeace spokesperson told the Guardian.