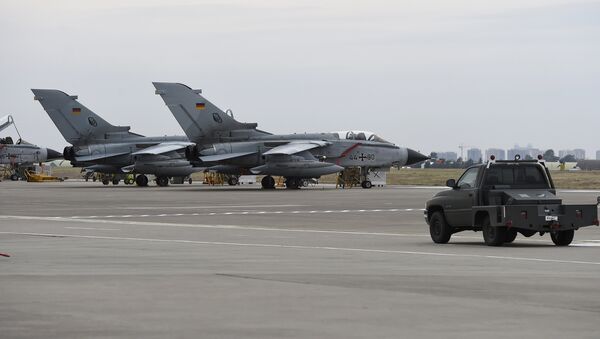 Germany may join possible airstrikes on Syrian government forces by western nations in the event chemical weapons are used by Damascus, according to local media.

The German Defense Ministry has been mulling over joining possible airstrikes by the United States, the United Kingdom and France against Syrian government forces, Bild reported. The ministry is considering this option in the event of a possible use of chemical weapons in Syria, which they presume will be carried out by Syrian government troops, the outlet said.

Earlier in the day, French Minister for the Armed Forces Florence Parly said that if chemical attacks are carried out in Syria,a response will follow, including those from France.

World
Most of Syria's Idlib De-Escalation Zone Still Controlled by Militants – Moscow
US Department of State spokesperson Heather Nauert also said in a press briefing that the United States and its international partners would respond swiftly to any verified chemical weapons use in Syria.

Russia's Defense Ministry previously warned that the leader of the Tahrir al-Sham terrorist group, which is affiliated with the Al-Qaeda-linked al-Nusra terror organization (banned in Russia), was planning a chemical attack against civilians in the Syrian province of Idlib in order to provoke western nations into retaliating against Damascus.

Idlib province is currently the last remaining insurgent stronghold in Syria. The province was seized by the Jabhat Fatah al-Sham (also known as al-Nusra) terror group in 2015. The Syrian government allowed radicals who surrendered in the city of Aleppo, in Homs province and in the Damascus suburb of Eastern Ghouta to leave for Idlib.

READ MORE: Clashes in Idlib May Result in Displacement of Up to 700,000 People – Report

On Monday, US President Donald Trump urged the Syrian government as well as Russia and Iran to prevent a possible offensive in Idlib by the Syrian army, saying such a move would be "a grave humanitarian mistake" and that "hundreds of thousands of people could be killed."