Boobs With No Surgery: Try on This 3D Optical Illusion 'Boob Job' Top 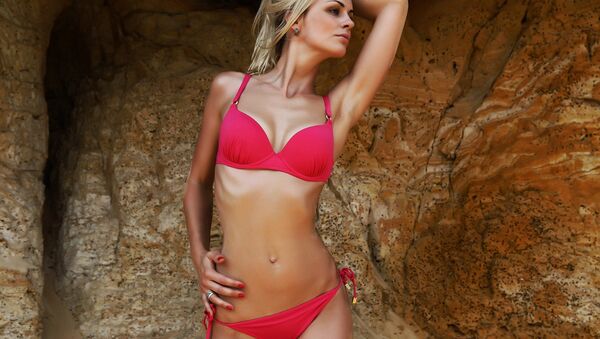 A unique shirt has already hit the shelves and the item on offer is just out of the ordinary, as it lends its wearer the looks of a beauty with a boob job with no push-up foam rubber involved; so it doesn’t come as a surprise that the magic top has already become an absolute sensation online.

In curious footage that has been eagerly shared on Reddit, a woman demonstrates her white top drawing attention to a most strategically placed pattern: a black and white grid right across the chest. And the magic is already there, since a barely-there bust is enhanced several times if the model poses en face, but as soon as she turns even a small a bit to the side, the bust momentarily “deflates.”

The trick was first made public by the courtesy of Japanese vlogger and actress Sakura Inagaki Saki, who had agreed to review the T-shirt, pictures of which have been circulating online ever since, from YouTube and on to Reddit via the image host Imgur.

The reviews are meanwhile most inspirational:

"That's amazing. Boobs for everyone!“ one said, with another user weighing in:

“I need this shirt please.”

Some, however, expressed their perplexity, since they fear their friends would question why they wear one and the same shirt at all times.

“I feel betrayed," said one user.

The price for the guilty pleasure is, however, more than reasonable, given all the strong points of the promised experience: a mere £15, according to the Teezily website offer. To attract buyers, the retailer stated that all the potential advantages in black and white:

“Don't let your dreams be dreams! If you’re tired of wearing heavily-padded push-up bras because they squeeze your barely-there boobs and make you feel ‘suffocated’, here’s a more comfortable alternative you can consider.”