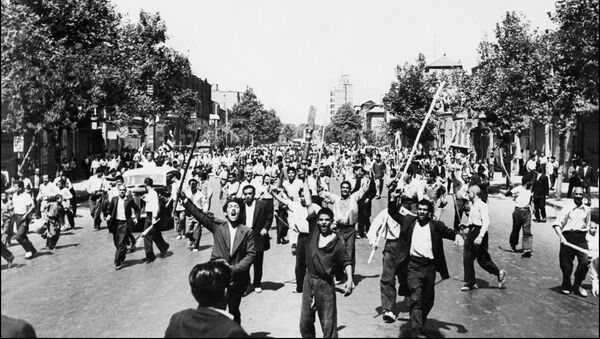 © AFP 2021 / INTERCONTINENTALE
Subscribe
The lessons of the 1953 coup d'etat in Iran remain unlearned by the US leadership, Iranian scholars told Sputnik. Washington has adopted old methods of psychological warfare and economic pressure to manipulate Tehran into making concessions; however, over the past 65 years the Islamic Republic of Iran has dramatically changed, they said.

The Trump administration has adopted the methods Washington resorted to 65 years ago to carry out a coup d'etat in Iran, Professor Seyed Mohammad Marandi, an expert on American studies at the University of Tehran, told Sputnik Persian.

"In my opinion, now the situation in Iran is not very similar to that time," he said. "But the methods used by the US are similar. This is an oil boycott and a psychological war. Then the Persian BBC radio service was engaged in this, now it is BBC television and social networks in Persian sponsored by the West, and thousands of people who conduct psychological cyberwar from Iran to the morning. But, I repeat, now the situation is completely different. The current leadership of Iran is very different from the government of Dr. Mossadegh."

From 1953 Coup to Bolton's Vow: Why US Regime Change Op in Iran Won't Work
Marandi's comment came on the heels of a statement made by Iranian Foreign Minister Mohammad Javad Zarif, who accused the US of carrying out "actions," which could lead to yet another coup d'etat in the country.

In 1953, the CIA-backed coup d'etat led to the ousting of the legitimately-elected cabinet headed by Prime Minister Mohammed Mossadegh, replacing it with the government of General Fazlollah Zahedi.

According to Marandi, one of Mossadegh's grave mistakes was that he was "naïve" and "trusted the United States." At the same time, the former prime minister tried to preserve the pro-Western Iranian monarchy, he added. "In addition, Dr. Mossadegh could not stand being reprimanded, which led him to isolation within the country," he noted, adding that the United States had used "these numerous internal contradictions."

"Now the leaders of our country are not so naive and do not cherish illusions about the intentions of the United States," the Iranian professor emphasized. "Even those who looked optimistically at the future of US-Iranian relations following the signing of the Joint Comprehensive Plan of Action (JCPOA) realized that they could not trust the US and its allies, witnessing [Barack] Obama's complete inactivity with regard to the JCPOA and Trump's aggressive policy towards Iran."

Tehran's Enemies Are Waging Economic, Media War Against Iran – Khamenei
Fuad Izadi, an Iranian researcher specializing in American affairs and a member of the scientific council of the department of US studies at the University of Tehran, shares Marandi's stance.

He stressed that a potential coup d'etat involving the Iranian military under the command of the United States, Britain or another country in Iran is absolutely impossible.

"The senior leadership of the Shah army was educated in America and the Shah himself was an American-British apprentice," Izadi said. "Today, the Islamic Revolutionary Guard Corps (IRGC) and other units of the Iranian army are trained in their country and belong to the people of Iran. Our army will never go against its people."

He noted that although numerous US programs aimed at regime change in the Islamic Republic of Iran (IRI) and other countries had never declared their genuine goals openly, their incentives and motivation were clear.

"For example, in the US budget for 2017 such actions were not called as a preparation for a coup, instead they were dubbed "democracy programs," the researcher remarked, explaining that these endeavors were targeting the states not bowing before Washington, namely Iran, Russia and China.

Professor on Iran Action Group: Indication that US Interested in Regime Change
According to Izadi, the Iranian people should keep in mind the events of 1953 and "closely monitor every step of American officials and their proteges."

Commenting on Washington's unilateral withdrawal from the JCPOA in May 2018 and the resumption of anti-Iranian sanctions, he noted that the Trump administration's primary aim is to trigger civil unrest in the country. However, these efforts will prove futile, the researcher foresees, as the people of the IRI know that the real "culprit" behind the sanctions is Trump, not Iranian President Hassan Rouhani.

For his part, Marandi highlighted that Washington's attempts to limit Iran's access to the US dollar prompted Tehran and other countries to seek alternatives to the greenback.

"It seems that over the past 65 years the Americans have failed to understand how they should deal with the Iranian people," Izadi concluded.

000000
Popular comments
They use the same script, time and time again. Those that are more than happy to sell their nation for 30 pieces of Soros silver, must be so proud.
anne00marie
8 September 2018, 11:04 GMT2
000000
The photo is reminiscent of the opening scene in the 2001 Space Odyssey!
kayser
9 September 2018, 20:48 GMT
000000
Newsfeed
0
New firstOld first
loader
LIVE
Заголовок открываемого материала
Access to the chat has been blocked for violating the rules . You will be able to participate again through:∞. If you do not agree with the blocking, please use the feedback form
The discussion is closed. You can participate in the discussion within 24 hours after the publication of the article.
To participate in the discussion
log in or register
loader
Chats
Заголовок открываемого материала
Worldwide
InternationalEnglishEnglishMundoEspañolSpanish
Europe
DeutschlandDeutschGermanFranceFrançaisFrenchΕλλάδαΕλληνικάGreekItaliaItalianoItalianČeská republikaČeštinaCzechPolskaPolskiPolishСрбиjаСрпскиSerbianLatvijaLatviešuLatvianLietuvaLietuviųLithuanianMoldovaMoldoveneascăMoldavianБеларусьБеларускiBelarusian
Transcaucasia
ԱրմենիաՀայերենArmenianАҧсныАҧсышәалаAbkhazХуссар ИрыстонИронауОssetianსაქართველოქართულიGeorgianAzərbaycanАzərbaycancaAzerbaijani
Middle East
Sputnik عربيArabicArabicTürkiyeTürkçeTurkishSputnik ایرانPersianPersianSputnik افغانستانDariDari
Central Asia
ҚазақстанҚазақ тіліKazakhКыргызстанКыргызчаKyrgyzOʻzbekistonЎзбекчаUzbekТоҷикистонТоҷикӣTajik
East & Southeast Asia
Việt NamTiếng ViệtVietnamese日本日本語Japanese中国中文Chinese
South America
BrasilPortuguêsPortuguese
NewsfeedBreaking
06:36 GMTThird of Swedish Police in Blighted Areas Have Mental Issues – Survey
06:27 GMTFormer US Defence Chief Mark Esper Sues Pentagon for 'Blocking' Parts of His Memoir
06:09 GMTPriti Patel to Hold Talks on Migration Crisis With European Ministers Despite French Snub
06:00 GMTKnow-How: Who Actually Made Scythian 'Gold'
05:59 GMTDenmark Bans Influencers From Advertising Cosmetic Surgery, Sugar Dating to Minors
05:51 GMTUK Convenes Urgent G7 Ministerial Meeting Over COVID Variant Omicron as WHO Urges Not to Panic
05:07 GMTMass Killer Breivik Sending Letters to Survivors With Excerpts From His Manifesto
04:47 GMTCOVID-19 Live Updates: Japan to Ban Travellers From Entering to Prevent Spread of Omicron Variant
03:46 GMTVideo: Jacksonville Jaguars Mascot Risks it All in Failed Stunt, Still Unable to Bring Luck to Team
03:39 GMTGOP Lawmaker Says Biden’s Social Spending Plan Would Allow IRS to 'Spy' on Americans
02:53 GMTMaduro Calls EU Observers at Latest Venezuelan Elections ‘Delegation of Spies’
02:43 GMT'Keep Livin': Matthew McConaughey Decides Not to Run for Texas Governor
02:36 GMTOver 2,000 People Protest Against COVID-19 Measures in Prague - Reports
02:19 GMT'French Trump' & Possible Presidential Candidate Zemmour Spotted Showing Middle Finger to Protester
01:28 GMTMarket Bull Expects US Fed to Raise Rates Six Times By 2024 Due to High Inflation
00:24 GMTRepublican Rep. Says Congress Leadership 'Needs to Change' as GOP Could Secure Southern Border
YesterdayFauci Tells Biden It Will Take 2 Weeks to Have Full Information on Omicron Strain
Yesterday‘Absolute Hubris’: Rand Paul Slams Fauci For Saying 'I Represent Science'
YesterdayRoger Stone Calls FBI 'Biden's Personal Gestapo' While Speaking of Jan. 6 Committee Subpoena
YesterdayJennifer Lopez Feels Her Reunion With Ben Affleck Is 'Truly Meant To Be,' Report Says