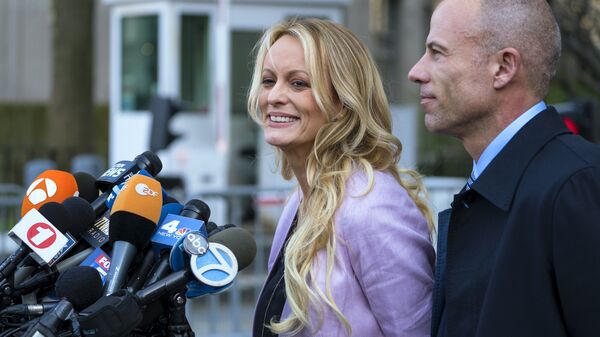 Adult film actress Stormy Daniels claims she had an affair with Donald Trump in 2006 and is suing to invalidate the nondisclosure agreement she signed just days before the 2016 presidential election.

Viral
'Two Minutes': Stormy Daniels Shares New Details of Alleged Affair With Trump
The company wants Stormy Daniels, whose real name is Stephanie Clifford, to repay the $130,000 she was paid as part of the nondisclosure agreement, which was signed days before the 2016 presidential election.

Daniels claims she had an affair with Donald Trump in 2006, which Trump denies, and was suing to invalidate the nondisclosure agreement.

Essential Consultants was established by Michael Cohen, who pleaded guilty in federal court last month to campaign-finance violations, including the payment of hush money to Daniels and a former Playboy model to influence the election.

Stormy Daniels' lawyer, Michael Avenatti, dismissed the cancellation offer as "a stunt by Michael Cohen trying to fix it so that Donald Trump is not deposed."

Avenatti added that he would not settle the case without deposing Trump and that he believes the court should invalidate the agreement because it violated campaign finance laws.

Daniels is also suing Trump and Cohen for defamation.

The first reports of an alleged affair between Trump and Daniels were published in October 2011 by the blog The Dirty and the magazine Life & Style.

Around the same time, Daniels talked about the alleged affair with the gossip magazine In Touch Weekly, which chose not to publish the interview after Cohen threatened to sue the magazine.

In January 2018, The Wall Street Journal reported that Cohen paid Daniels $130,000 in October 2016, a month before the presidential election, to prevent her from discussing an affair she allegedly had with Trump in 2006.

Michael Cohen initially denied the existence of an affair on behalf of his client, Trump, but later acknowledged having paid Daniels $130,000, saying the payment was made with his own funds.