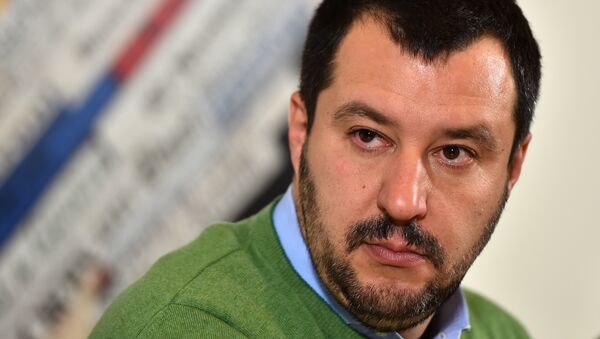 Having previously supported his Italian colleague in his pre-election campaign in March, Bannon travelled to Italy again in order to officially welcome the country’s interior minister into his up-and-coming pan-European political group.

Meeting this morning with Steve Bannon and Matteo Salvini. The Movement: He is in! pic.twitter.com/3RszHAIEwY

Italian media reported that Bannon had suggested the upcoming European elections would usher in a new era, with populist movements gaining steam in their fight against German Chancellor Angela Merkel’s and French President Macron’s policies.

"Good news! Salvini is ready to work with Steve Bannon to "save Europe"!"

Friday’s meeting follows recent talks between Salvini, the head of the Italian League Party, which is included in the ruling coalition, and Hungarian right-wing Prime Minister Viktor Orban, who keeps to a firm anti-immigration stance in a bid to curb illegal migration across his country and beyond. After their meeting on August 28, they asserted that they were “walking down the same path” as they discussed the formation of a joint anti-migration front to counter Macron’s policies.

“My view is that somewhere between a quarter and a third of seats in the European parliament are going to be Eurosceptic and Euro-critical,” he said.

Steve Bannon, the former head of Breitbart News, aims to establish a pan-European foundation to unite the right-wing efforts across the EU.  Bannon said the new foundation would offer polling, think tank research, would provide tips on messaging and data targeting to right-wing groups, which have seen growth in support in recent years.

Bannon notably travelled to Rome back in March to support Salvini in his pre-election campaign. Separately, on Wednesday, Bannon met another Italian right-winger in Venice — Giorgia Meloni, founder of the party Brothers of Italy and close to Silvio Berlusconi and Salvini.

A survey of national polls published by Reuters suggests that Eurosceptic parties could boost their strength in the EU’s legislative body by over 60 percent in next May’s elections, with the number of Eurosceptic MEPs potentially rising to 122 seats.