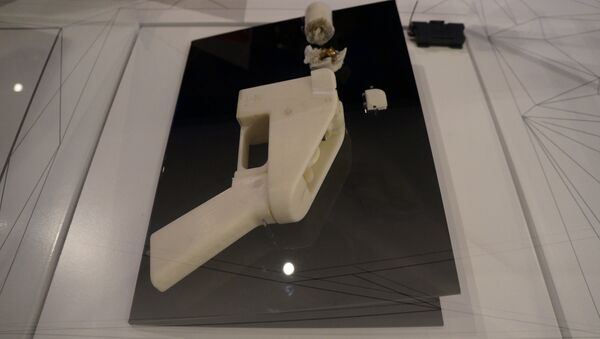 3D-gun pioneer Cody Wilson said that YouTube had removed the fundraising video and press conference, featuring the New York Times and Associated Press reporters, the Washington Free Beacon says. "They're saying it's ‘promotion of the sale of firearms.' They removed every video I've ever made on ghost gunner and Defcad," – Wilson told the newspaper.

"It's self-evidently an attempt at controlling our culture and people's discovery of it," Wilson said, noting that YouTube has not responded to his appeals and the company is preventing others from hearing his message.

Trump Says 'Looking Into' Issue of 3D Plastic Guns
The removed video featured a press conference given by Wilson in August, where Wilson explains to journalists from various media outlets his reaction to a recent ruling of the federal judge against the Settlement with State Department despite admitting that such an injunction amounts to the suppressing of Wilson's First Amendment rights. The judge ruled that the right of three speech “is currently abridged, but it has not been abrogated” in this case as Wilson would still be able to share the blueprints via personal email and other meanings “without uploading them to the internet.”

Free Beacon also posted an email from YouTube Team to Wilson’s company. "As you may know, our Community Guidelines describe which content we allow—and don't allow—on YouTube," the email said, "Your video Cody Wilson—Press Conference—Defense Distributed—8-28-2018 was flagged to us for review. Upon review, we've determined that it violates our guidelines and we’ve removed it from YouTube."

3D-Printable Gun Inventor Pledges to Fight Design Sharing Ban in Supreme Court
This is not the only video from the developer's playlist removed by YouTube. Wilson said that all of his videos on ghost gunner and Defcad were removed for “promotion of the sale of firearms.” Wilson’s video on fundraising, where he tried to raise $400,000 in support for the legal right to publish plastic gun blueprints available for public download was also banned.

YouTube spokesperson, refused to be identified, reportedly said that the removal is caused by the recent updates to policy enforcement guidelines. “In March, we notified creators of planned updates around content facilitating the sale or manufacture of firearms and their accessories, giving them several months to review their accounts and remove violative content,” he said, claiming that the video included a link to DefCad.com – a website which sells the blueprints. According to a spokesperson, YouTube is no longer allows content which facilitates sales of the firearms, their manufacture or links to the websites selling firearms.

This is not the first time media companies trying to prevent public sales of the plastic gun blueprints. Facebook had recently banned content discussing websites hosting the same blueprints Wilson wants to publish. Amazon banned CodeIsFreeSpeech.com for web hosting and also banned a book containing the raw code for Wilson’s gun design from sale through the Amazon website.