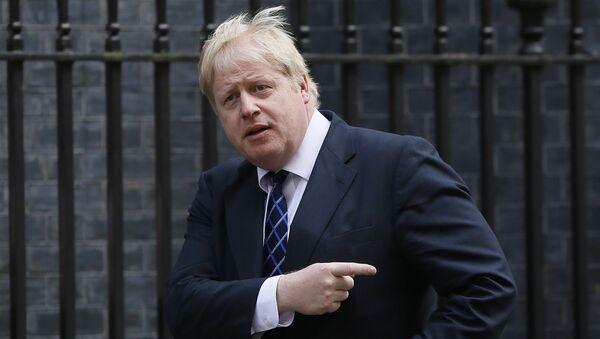 © AP Photo / Kirsty Wigglesworth
Subscribe
Most recently, The Sun has published a story detailing then-Foreign Secretary Boris Johnson’s dinner with a “blonde” aide on Valentine’s Day amid news of his divorce.

Journalist Petronella Wyatt, who had a four-year affair with Boris Johnson while they worked at The Spectator, revealed that his “views on matters such as monogamy are decidedly Eastern.”

“I find it genuinely unreasonable that men should be confined to one woman,” Johnson allegedly told Wyatt, who added, “Like many loners, he has a compensating need to be liked.”

Wyatt, who was said to have had an abortion while in a relationship with Johnson, has previously claimed that the ex-London mayor was “inordinately proud of his Turkish ancestry.”

MPs Reportedly Doubt Rumors of Fling May Derail BoJo's Potential Leadership Bid
She further claimed that despite being a ladies’ man, Boris “regards himself as rather ugly” and relies on his charm while seducing women.

Johnson’s extramarital affair with Wyatt cost him his post as shadow arts minister and party vice-chairman in 2004, even though he had denied the romance claims, dismissing them as “an inverted pyramid of piffle.”

Following the scandal, his wife Marina Wheeler tossed him out of their home in North London, but eventually forgave Boris and took him back.

Earlier in the day, The Sun published another story and pictures, showing the then-foreign secretary enjoying a glass of wine with an attractive “blonde” aide on Valentine’s Day, with some insiders claiming that the love affair between the two had been an “open secret” among some government advisers.

Johnson dived into the limelight after The Sun published cheating claims, which were followed by speculation that he and his wife were splitting up. In a joint statement Friday, Boris and Marina confirmed that their divorce was underway.

000000
Popular comments
Boris, you may be right about the needs of 'men', but you don't fit into that category. So STFU