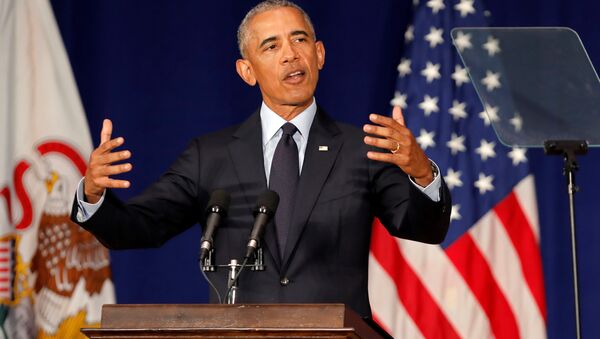 Obama's Friday speech at the University of Illinois at Urbana-Champaign marked his departure from the role of elder statesman he had cultivated in the 18 months since he left office. He not only indicted the Republican Party and his successor, but called on Americans to take action and stop the downward trends in American society by voting Democratic in the upcoming midterm elections.

"In two months we have the chance, not the certainty, but the chance to restore some semblance of sanity to our politics," he said.

Lazare, who is the author of three books "The Frozen Republic," "The Velvet Coup" and "America's Undeclared War," told Radio Sputnik's Loud & Clear that Obama's message is very important because "[m]any people still think of Obama as ‘their president.'"

​"He seems to stand out strikingly against Trump. Therefore, his message is very important."

During his nearly two-hour speech, Obama gave a brief survey of US history, which he called "the story of America," and which he portrayed as "a story of progress, fitful progress, incomplete progress, but progress… Of course, there's always been another darker aspect to America's story. Progress doesn't just move in a straight line… The status quo pushes back."

"It did not start with Donald Trump," Obama said. "He is a symptom, not the cause. He's just capitalizing on resentments that politicians have been fanning for years, a fear and anger that's rooted in our past; but it's also born out of the enormous upheavals that have taken place in your brief lifetimes."

Lazare said that in his framing of US history and of Trump's administration, Obama was "making a self-serving argument, that he is the force of change, his only fault was trying too hard to do good, and that Trump represents the inevitable backlash."

"But how was Hillary a force for change? How was the disaster that she wrought on the Middle East or Central America, how was that somehow beneficial, how was that good?" Lazare pointed out that "Obama's not willing to take responsibility for any of the harms he did or allowed to happen. He's painting his administration in the most favorable colors possible."

"It's a fairy tale version of American history, in which Americans are always right even when they do wrong. Vietnam was a horrible crime. Iraq was one of the great blunders and great crimes of the postwar period. These flowed out of the whole structure of American politics," the author said.

"Under Obama, beginning in 2011, the damage widened. I mean, he destroyed how many countries? Libya, Syria, Yemen — this is really a remarkable record which Obama is not taking responsibility for."

Obama took particular aim at Trump's response to the alt-right movement, in particular the way Trump has equivocated on the issue of the "Unite the Right" rallies that happened in Charlottesville, Virginia, in August 2017, and again in Washington, DC, on the one year anniversary of the first rally. During those demonstrations, which Sputnik reported were very strongly opposed by anti-fascist counterprotesters, various political groups rallied together in defense of white supremacy, including Ku Klux Klan members, neo-Nazis and all manner of fascists and far-right traditionalists in their orbit.

Apparently, for Obama it was quite hard. Lazare explained that Obama's statement presented "an upside-down view of history."

"What Obama did in Ukraine, or at least allowed to be done, was extraordinary. Obama, in his speech, took a swipe at Trump for refusing… to condemn, Nazis in Charlottesville, but in fact, the US sponsored and collaborated with and encouraged a fast-growing Nazi element in Ukraine. Ukraine is now a country that is overrun by ultra-right militias. Not despite what the US did, but because of it."

However, the journalist was not purely critical of Obama. Lazare gave the former president credit for his "implicit rebuke to the New York Times" when he indirectly criticized the op-ed run in the paper two days ago, titled "I am a part of the resistance inside the Trump administration," ostensibly written anonymously by a senior Trump official.

In the op-ed, the anonymous official claims that he and "like-minded colleagues" are working against the president's orders "to thwart parts of his agenda and his worst inclinations."

"The claim that everything will turn out okay because there are people inside the White House who secretly aren't following the president's orders, that is not a check," Obama said. "That's not how our democracy's supposed to work. These people aren't elected. They're not accountable. They're not doing us a service by actively promoting 90 percent of the crazy stuff that's coming out of this White House, and then saying, ‘Don't worry, we're preventing the other 10 percent.' That's not how things are supposed to work. This is not normal."

Lazare told show hosts Brian Becker and John Kiriakou that the NYT's presentation of the op-ed portrayed these actors as "somehow part of a legitimate constitutional response to Trump's destructive tendencies… it's akin to calling for a coup d'etat."