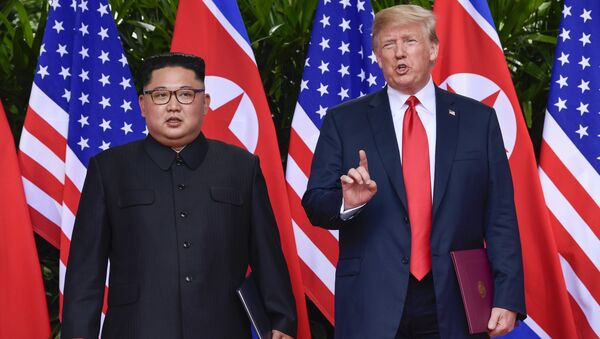 © AP Photo / Susan Walsh, Pool
Subscribe
International
India
Africa
WASHINGTON (Sputnik) - US President Donald Trump said North Korean leader Kim Jong-un has written him a letter that was transferred across the country's border and will soon be delivered to him by Secretary of State Mike Pompeo.

"I know that a letter is being delivered to me, a personal letter from Kim Jong-un to me…. It was handed at the border yesterday. I think it’s being brought in by Mike Pompeo," Trump told reporters aboard Air Force One on Friday, as quoted by the White House press pool.

Trump said he believes the letter is "positive" and called the method of communication "very elegant."

The US president said his relationship with Kim started on a bitter note and he, therefore, had to be rough on North Korea.

Trump Administration Trying to Restrain the President - Associate Professor
He noted that his strategy has brought positive results in that there has not been a missile test since the US-North Korea bilateral summit in Singapore on June 12 and the United States received American hostages back from Pyongyang.

Trump's comments came after a special envoy of South Korean president Moon Jae-in announced late Thursday that the third inter-Korean summit would be held on September 18-20 September in North Korea.