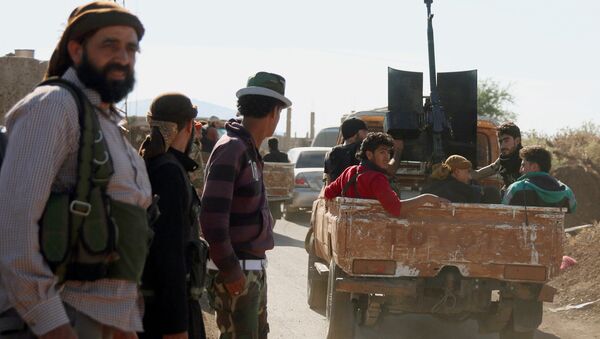 A new report gets dirty on the details of Israeli funding and weapons shipments to 12 anti-government extremist groups in Syria. Buried in the end of the piece is the revelation that Israel helped evacuate so-called “rebel commanders” as they also flew out members of the self-proclaimed “impartial” White Helmets organization.

On August 22, Israel evacuated some 800 members of the White Helmets, a group funded by the United States, United Kingdom, Germany and other Western countries, that claims to be an impartial civil defense organization but has been accused by Syria and Russia of terrorism. Its members have been caught on video grinning wildly as a child nearby was being beheaded in addition to other atrocities, while a high-budget film about the group won the 2017 Academy Award for best documentary.

But as the White Helmets and members of their immediate families were evacuated from southern Syria as the government was liberating it from jihadists, so too were "rebel commanders" and their families, according to Foreign Policy.

Those commanders' whereabouts are unknown. For the article, Foreign Policy spoke with "more than two dozen commanders and rank-and-file" members of the groups funded and evacuated by Tel Aviv. Some people in Syria say the evacuees are in Israel, and others say they are in Jordan. "One former commander informed his subordinates that he had arrived in Turkey," the outlet reported.

The White Helmets were flown by Israel into Jordan to be resettled in the West, including Canada, Germany and the United Kingdom.

But the crux of the Foreign Policy article was Israel supplying weapons to Syrian proxies. It's been a big week for revelations on the topic. Sputnik News reported on Tuesday that the Jerusalem Post, a news organization founded in 1932 during the British Mandate of Palestine, deleted — without explanation — an article detailing a press conference in which senior members of the Israel Defense Forces came clean about their support for Islamist extremists in the Golan Heights, two thirds of which have been illegally occupied by Israel since 1967.

On Thursday, US Ambassador to Israel David Friedman said it's "possible" that the US may recognize the Golan Heights as part of Israel.

According to the deleted article, Israeli officials admitted to supporting seven anti-government groups in the Golan Heights with light weapons and munitions. But a new investigative report by Foreign Policy ups the number of groups getting lethal support from Israel to 12.

That's in addition to the IDF paying each fighter $75 a month and additional cash for buying weapons on the black market. It isn't clear how much funding Israel provided to that end, but the Jerusalem Post article noted that one of the groups consisting of just 400 fighters got $5,000 a month.

That group is Fursan al-Joulan (Knights of the Golan). According to the Israeli newspaper Haaretz, al-Joulan "prepared the final coordination for the rescue." Abu Rateb, a commander of the group, was also evacuated by Israel, according to Al Masdar News, which reported that three other group commanders were also shipped out. A commander of Saif al-Sham, a group which condemned al-Nusra then later joined a Nusra-organized coalition, was also evacuated.

While Israel has treated fighters of Jabhat al-Nusra, an al-Qaeda affiliate, in its hospitals, many of the rebel groups in the Golan and Syria's Quneitra province are believed to be working closely with al-Nusra. Al-Joulan "undoubtedly has an affiliation with a larger Islamist group like al-Nusra or al-Qaeda, but I haven't been able to determine that," Israel analyst Richard Silverstein wrote in Middle East Eye.

"Israel stood by our side in a heroic way," al-Joulan spokesman Moatasem al-Golani told The Wall Street Journal in 2017. "We wouldn't have survived without Israel's assistance."

The Wall Street Journal interview "makes clear that it isn't affiliated with the Free Syrian Army, which increases the likelihood that Fursan al-Joulan is an Islamist group," Silverstein added.

Meanwhile, "everyone" in the in the Syrian village of Hader in the Golan believes that Israel and the West "tacitly" support Al-Nusra, according to a May report from the UK news organization Channel 4. One villager called them "proxies."

Now, it appears that some of the group's members have reversed their opinions on the country. After Israel kept out of the way of the Syrian army and Russian airpower during the liberation of southern Syria earlier this summer, one fighter told Foreign Policy, "This is a lesson we will not forget about Israel. It does not care about… the people. It does not care about humanity. All it cares about it its own interest." Reportedly, many of the members begged for asylum but did not get it. Some joined the Syrian Arab Army instead.