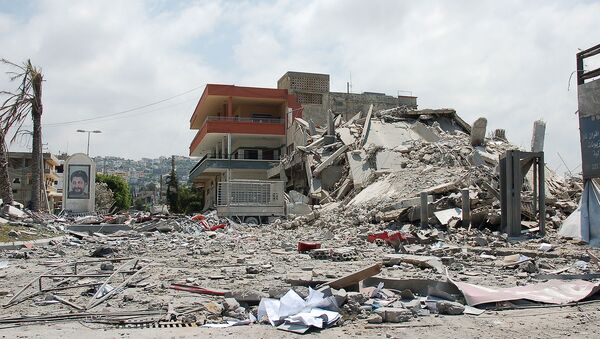 A senior commander in the Israel Defense Forces told Haaretz Wednesday that as a consequence of “a stronger Hezbollah in Lebanese politics,” in future conflicts, Israel would make no distinction between Lebanese forces and those of Hezbollah’s militia.

"The distinction we made between Hezbollah and Lebanon during the Second Lebanon War was a mistake," said the official, who is the senior officer in the army's Northern Command near the Lebanese border, about the 2006 conflict. "In the next war we will not make this distinction. We will hit Lebanon and any infrastructure that would contribute to the fighting."

During the 2006 war in which Israel invaded southern Lebanon until it was halted and forced to withdraw by stubborn resistance by both Lebanese forces and Hezbollah fighters, over 1,200 people were killed, the vast majority of them civilians, due to Israeli bombardments and bombing. Human Rights Watch claimed the IDF used both cluster bombs and white phosphorus munitions on civilian urban areas, both of which are illegal to use in warfare, and most of which were deployed in the last 72 hours of the conflict, after the UN had already mediated a ceasefire. The war severely damaged Lebanese infrastructure and displaced 1 million Lebanese civilians.

The officer justified the position by claiming that Hezbollah is virtually in control of the Lebanese military, Haaretz noted.

"Hezbollah upgraded its capabilities through its fighting in Syria," he said. "It gained confidence in the fighting, but today it can't enter Israeli territory with large forces and hold the ground."

The comments echo those made by Israeli Education Minister Naftali Bennett, of the right-wing Jewish Home party, on Twitter on May 7, when he said following the Lebanese elections that "Hezbollah = Lebanon," Reuters reported.

"The State of Israel will not differentiate between the sovereign State of Lebanon and Hezbollah, and will view Lebanon as responsible for any action from within its territory," he said.

Lebanon's elections in May, the first in nine years, saw the Hezbollah-Amal alliance improve its position in the government, although together they only gained five seats. The biggest change was the collapse of the Future Movement, which lost 13 seats. With FPM gaining five seats also, the result was a balancing of power between blocs. The Amal-Hezbollah alliance, which includes nearly a dozen other small parties, together holds 40 seats. The FPM and its allies together hold 29 seats, the Future Movement and associated delegates comprise 20 seats, and the Lebanese Forces and their allies now control 15, having gained seven seats in May.

After the election, Hezbollah-Amal agreed to nominate Saad al-Hariri, who leads the Future Movement party, to continue as prime minister, although with a distinct shifting of cabinet posts. The Lebanese Constitution, carefully drafted to create a balance of religious representation in the diverse country's government, designates the office of prime minister go to a Sunni Muslim, meaning neither leader of the two Shiite parties can occupy it.

The bloc has also put pressure on Hariri to normalize relations with the Syrian government as a condition of forming a cabinet, conditions Hariri rejected, the Lebanon Daily Star reported August 20.

However, no cabinet has yet been formed.

"[The delay] has started to risk sliding towards tension… and we warn of the dangers of this," representatives from the bloc said in a televised statement August 9, Reuters reported.

The Israeli army's position on Hezbollah as "equivalent" to the Lebanese government is thus extremely bizarre, considering also that Hezbollah has provoked ire among other parties not only by participating in fighting across the border in Syria over the summer, but also in its recent meeting with a Houthi delegation from Yemen, where another brutal war is being waged.

Gebran Bassil, the leader of the FPM and Caretaker Foreign Minister, told RT August 20 that "Hezbollah is an ally politically [to the Free Patriotic Movement], but when it comes to the official stance of Lebanon [on dissociation], there is no alliance there."

"We don't support the interference in Yemen's affairs," he added. The Lebanese government maintains a "Dissociation Policy," by which it refrains from involvement in regional conflicts, meaning Hezbollah's connections to both the Yemeni and Syrian wars pose a challenge to established governing party behavior.