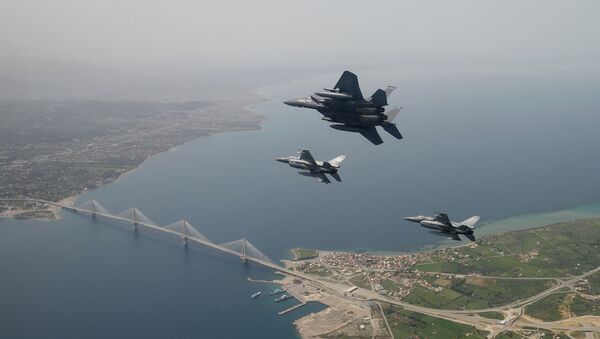 The US is exploring the possibility of boosting the numbers of drills and troops in Greece, which could lead to enhanced intelligence efforts in nearby hotspots like Libya, Syria and Turkey.

Greek officials are considering expanding US access to additional bases, Chairman of the Joint Chiefs of Staff Gen. Joseph Dunford told reporters in Athens on Tuesday.

Is the US Preparing a Massive Military Attack Against Syria?

Those officials "made a general overture saying they would be willing to consider that, and I certainly was enthusiastic about the possibility," Dunford told the Pentagon's internal news service, Stars and Stripes reported Wednesday.

Tensions between Turkey and the US have been high ever since US President Donald Trump recently authorized the doubling of steel and aluminum tariffs on Turkish exports, up to 50 and 20 percent, respectively, after Turkey refused to release detained American Pastor Andrew Brunson. Turkey jailed Brunson two years ago for his alleged ties to the movement founded by Islamic cleric Fethullah Gulen, whom Ankara has accused of orchestrating the 2016 failed military coup. In late July, Brunson was released from a Turkish prison and placed under house arrest.

According to Stars and Stripes, the US military has already "taken advantage" of several bases in Greece, including Naval Support Activity in Souda Bay and Greece's Larissa Air Force Base.

"We… have taken advantage of Souda Bay — it's a critical piece of infrastructure here in the region, and Greece has also been open to expanding training opportunities for our forces that are stationed in Europe, in particular for U.S. Army units to do training with helicopters," Dunford said Wednesday.

The news comes as NATO, an intergovernmental military alliance between 29 North American and European countries, recently set up a counterterrorism intelligence center in Naples, Italy, to counter any potential regional threats.