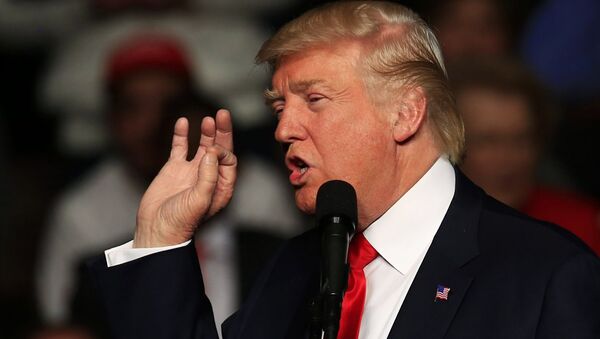 © Sputnik / Katelyn Oaks
Subscribe
International
India
Africa
US President Donald Trump's statement comes after a Washington Post journalist Bob Woodward claimed in his book that Trump was outraged and wanted to assassinate Syrian President Bashar Assad after he learnt about an alleged chemical attack at Khan Shaykhun on April 4, 2017.

Donald Trump stated on Wednesday that he did not discuss the possibility of assassinating Bashar Assad.

“It was never discussed,” Trump said to reporters when asked to comment on the matter.

Trump dubbed Woodward's book "total fiction" saying that "that was never even contemplated, nor would it be contemplated."

World
US State Senator: Trump Administration Poised to Prolong War in Syria
The book, above all, describes a telephone conversation between Trump and Secretary of Defense James Mattis, during which Trump allegedly said the following, according to Woodward: "Let's f***ing kill him! Let's go in. Let's kill the f***ing lot of them."

At the same time, the day before the US president warned Syrian president Bashar Al-Assad via Twitter against conducting a military operation in Syria's Idlib province, which remained a stronghold of insurgency in the country.

READ MORE: Trump Wants Saudis, 'Other Rich Countries' to Pay as US Slashes Aid for Syria

Idlib province is one of Syria's de-escalation zones and a remaining stronghold of insurgency in the country. The situation in the province has recently escalated with Moscow and Damascus suggesting that militants are planning to stage a false-flag chemical attack against civilians there to frame the Syrian government.