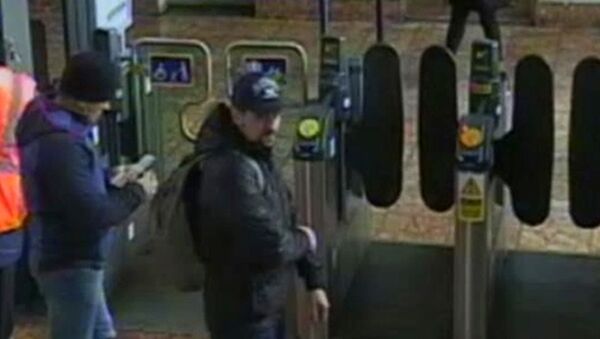 Sputnik will get you up to speed on the details regarding the Metropolitan Police's accusations against two Russian nationals, which London suspects were involved in a plot to poison Russian ex-spy Sergei Skripal and his daughter.

On Wednesday, the Met released photos of two men, identified as Alexander Petrov and Ruslan Boshirov, whom UK prosecutors have accused of being responsible for the March 4 poisoning attack against the Skripals in the southern English town of Salisbury.

The men, who traveled to London from Moscow on Russian passports and are suspected of being Russian nationals, are also believed to have used aliases, according to the police.

Skripal Case: UK Police Name 2 Russian Suspects, Moscow Calls for Cooperation
In addition to the photos, the police showed a series of still CCTV images of the two men traveling in and around the UK, including London and Salisbury, where they were shown near the Skripals' home. There, the police say, the suspects contaminated the house's front door with the Novichok nerve agent. The two men are said to have been in the UK from March 2 to March 4.

Officials said they would not request the suspects' extradition, but that a European arrest warrant had been issued instead.

Later in the day, in an address to parliament, Prime Minister Theresa May said that her government had concluded, "based on the body of intelligence," that "the two individuals named by the police and [prosecutors] are officers from the Russian military intelligence service, also known as the GRU."

Emphasizing that the GRU was a "highly disciplined" organization and that the attack could not have been a "rogue operation," May claimed that the operation was "almost certainly" approved "at a senior level of the Russian state." May called on Moscow to "explain what happened in Salisbury," and threatened new sanctions.

May Claims 2 Suspects in Skripal Poisoning Are Officers of Russian Intelligence
Opposition Labour Party leader Jeremy Corbyn condemned the "appalling attack" and said he would back any "reasonable and effective actions" by the government against Russia and the GRU, but added that London should work with the UN to help give the Organization for the Prohibition of Chemical Weapons (OPCW) the power to attribute blame for incidents involving the use of chemical weapons.

The UK Foreign Office issued a formal summons to Russia's charge d'affaires in London on Wednesday to confront him on the new information. The US ambassador to the UK tweeted that Washington stood "firmly together" with its British allies "in holding Russia accountable for its aggression on UK soil."

Responding to the Met's new claims, Russian Foreign Ministry spokeswoman Maria Zakharova said that the published names and photos "do not tell us anything," and urged London to "switch from public accusations and the manipulation of information to practical cooperation between law enforcement agencies."

Later in the day, Zakharova told reporters that the UK's ambassador to Russia turned down a request to provide further information on the suspects, including their fingerprints, which she recalled were a requirement for Russian citizens seeking to get UK visas. "The ambassador said the British side will not provide any materials," Zakharova said.

"London refused to provide any information at all about the case — their passport numbers, patronymics, personal details, etc.," Zakharova complained. "We will proceed from the idea that this information will be transferred through the Interpol line," she added.

Echoing Zakharova, the Russian Prosecutor General's Office told Sputnik that it was ready to cooperate with British law enforcement on the Skripal case, but also said that it expected to receive material evidence of the possible involvement of Russian citizens.

Russia Urges UK to Give Data on Russian Citizens' Involvement in Skripal Case
Alexander Shulgin, Russia's permanent representatives to the OPCW, called the UK's claims of Russian involvement in the Skripal case a "provocation," adding that the Russian position on the issue has not changed since the charges were first made back in March.

Vladimir Ushakov, an aide to the Russian president, said he could not understand what "signal" the UK was trying to send by publishing names that it admitted were likely to be aliases. "We have heard about two names, but these names do not tell me anything, just as they don't tell you anything, I think. Moreover, there was a commentary by Scotland Yard that these names are supposedly fake. [So] I don't understand what kind of signal the UK is trying to send. It's difficult to understand," Ushakov told Sputnik.

Finally, Viktoria Skripal, Sergei Skripal's niece, commented on the names released by the Met by suggesting they should have just called them Ivanov. "Why not just Ivanov? Then you could grab every third [Russian] and say 'it's him,'" she said in a commentary to Sputnik.

UK Summons Russia's Charge d'Affaires Amid New Information on Skripal Case
Former GRU officer Sergei Skripal and his daughter Yulia were found unconscious on a park bench in Salisbury, UK, on March 4. Shortly thereafter, the British government blamed Russia for the poisoning, prompting a diplomatic row between the two countries, which culminated in a tit-for-tat expulsion of dozens of diplomats. UK labs were unable to trace the origins of the substance that poisoned the pair, but did conclude that the poison used was novichok, a military-grade nerve agent developed in the Soviet Union, but which the US and its allies have had access to since the 1990s.

Moscow, which destroyed the last of its Soviet-era chemical weapons stockpile in 2017 under OPCW supervision, has categorically denied all charges of involvement in the Skripal affair, and has been calling for a joint investigation. Intrigue surrounding the case has been magnified due to the Skripals speedy recovery despite their exposure to the deadly agent, and the poisoning of a second couple in nearby Amesbury this summer, as well as due to the presence of a UK Defense Ministry chemical research facility in the vicinity of both Salisbury and Amesbury.