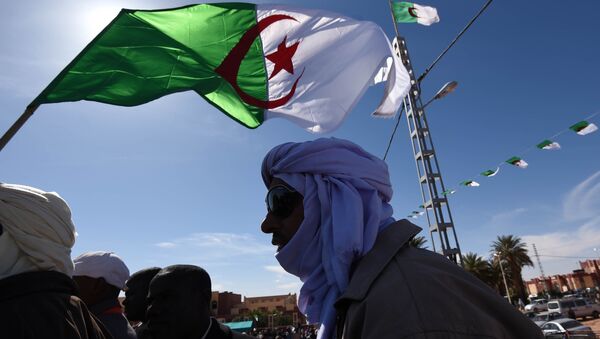 © AFP 2021 / FAROUK BATICHE
Subscribe
MOSCOW (Sputnik) - Algeria and China have signed a memorandum of understanding on Beijing's Belt and Road Initiative (BRI), which is aimed at developing infrastructure and strengthening ties between Eurasian countries, as well as with Africa, Oceania and other nearby regions, according to Algeria Press Service.

The memorandum was signed by Algerian Foreign Minister Abdelkader Messahel and chairman of China's National Development and Reform Commission He Lifeng on the sidelines of the Forum on China-Africa Cooperation (FOCAC) in Beijing on Tuesday, according to Algeria Press Service.

Algerian Prime Minister Ahmed Ouyahia welcomed on the sidelines of the summit the Chinese contribution to Africa's development.

Russia Ready to Offer Nuclear Technology to Algeria
Chinese President Xi Jinping earlier said that China intended to strengthen cooperation with the African continent in fight against terrorism, piracy and other challenges and will continue to provide the African Union with free military aid.

China's Belt and Road Initiative was first announced by Xi in 2013. The initiative focuses on the Maritime Silk Road, which connects China and Europe via India, East Africa and the Red Sea states, and on the Silk Road Economic Belt, which includes the Central Asia, Russia, and the Middle East.

FOCAC, which was established in 2000, comprises 53 African countries and China, along with the Commission of the African Union. The forum's objectives include the promotion of cooperation and friendship among members.