Spanish Plan to Dig up Franco But 'It's Ancient History to Many People' - Prof. 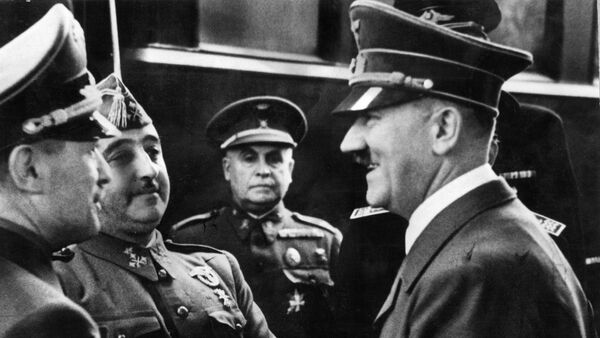 On August 24 the Spanish Socialist Worker's Party (PSOE) government of Pedro Sanchez announced plans to amend the 2007 Historical Memory Act which would remove the late dictator's remains from the Valley of the Fallen, a mausoleum 30 miles northwest of Madrid.

Although he died in 1975, Franco remains a deeply divisive figure in Spain, which was torn asunder by a vicious civil war in the 1930s.

2. The Valley of the Fallen, where Franco is buried, was started in 1940 and finished in 1958. The site was built to commemorate all of the victims on both sides of Spain’s Civil War, and the remains of more than 33,000 victims of the conflict lie there https://t.co/k4K15ygqnP pic.twitter.com/UooWFXgAU3

​But Professor Paul Preston, the Director of the Cañada Blanch Centre for Contemporary Spanish Studies at the London School of Economics, said the issue was irrelevant to most of the younger generation.

"Franco died 43 years ago and a very large proportion of the population were not alive or were young at the time, so for them it's ancient history. Many people couldn't give a hoot, so it would be unwise to exaggerate the polarization…it's not like the whole nation is on the verge of civil war," Prof. Preston told Sputnik.

In 1936 Franco led a Church-backed army rebellion against the democratically elected republican government in Madrid and three years later he formed a far-right regime with him as head, as Caudillo (Leader) or Generalissimo.

Around half a million Spaniards perished in the civil war, as well as thousands of left-wing volunteers in the International Brigades who fought on the losing side, and Franco survived the Second World War because he refused to join the Axis forces of his friends and allies, Hitler and Mussolini.

Franco's Falangist regime lasted for another 30 years — with opposition brutally dealt with — and in 1959 he completed a basilica in the Valley of the Fallen, claiming it was an attempt at reconciliation with all Spaniards.

But 20,000 political prisoners were used as forced labor in its construction.

The relatives of those who died on the republican side were furious a man they considered a demagogue and a serial abuser of human rights was buried alongside the "heroes" who died defending a democratic government.

Democracy was finally restored in 1976 — along with a constitutional monarchy under Juan Carlos — and a Socialist government, under Felipe Gonzalez, was elected in 1982 and ruled for 14 years. But it never sought to interfere with Franco's final resting place.

Prof. Preston said Gonzalez should have "taken the bull by the horns" but the former Prime Minister had told him they felt it was too dangerous, democracy was too fragile, and too many people in the 1980s were from a generation which had been "brainwashed…and believed the republic was evil and the puppets of Moscow."

Why Are The Socialists Doing This Now?

"So why now? Why are the Socialists trying to push this through now? One of the reasons is that they can't do much else. They only have 24 percent of the votes in the Spanish parliament. There is very little they can do in terms of legislation and they would be hard-pushed to get through a socialist budget," Prof. Preston told Sputnik.

He said the disinterring of Franco from the Valley of the Fallen was a gesture to "consolidate support in the Socialist heartlands."

The government of Mr. Sanchez, who only took over as prime minister in June, gave Franco's descendants 15 days from September 1 to decide what they wanted done with his remains.

Franco has seven grandchildren and they have expressed their "firm and unanimous" opposition to the exhumation.

"If an exhumation were to be performed against our will, we would demand that (the remains) are delivered to us so that we can proceed with a Christian burial," said the family's statement, which was carried in several Spanish newspapers.

Prof. Preston said their opposition was not a surprise as Franco's descendants were all wealthy and conservative and "basked in the reflected glory of the great man."

The Valle de los Caidos (Valley of the Fallen) memorial is Europe's only remaining monument to a fascist leader, but it also houses the bodies of 37,000 people from both sides of the conflict.

President @KRLS: Every day people legally pay homage to Franco’s mausoleum, Fundation Francisco Franco is legal and gets public money, duchess of Franco title is legal and renewed, etc. However calling for a self-determination referendum is ilegal pic.twitter.com/pJXQNHsRLU

​Mr. Sanchez has ruled out transforming Franco's controversial mausoleum into a place of reconciliation, despite a recommendation from a commission of experts.

Mr. Sanchez wants the Valley of the Fallen to become "a civilian cemetery for the remains of the victims of the civil war and Franco regime who are buried there."

Emilio Silva, president of the Association for the Recovery of Historical Memory, said the Valley of the Fallen should include "an exhibition that tells its story, who the workers were who were forced to build it, why they were chosen, which companies benefited from slave work."

Prof. Preston said he agreed the Valley of the Fallen should be an educational site, dedicated to preserving the memory of what really happened during the civil war and under Franco, rather than a "place of pilgrimage for the far-right who still idolize him."

Prof. Preston, who was knighted in June, said Spain was still wrestling with the legacy of the civil war and the Franco era.

"Those on the far-right who think Franco was a great man are outraged by the plans to dig him up. Others on the left think a democratic country shouldn't have a huge monument to a dictator. But Spain has street names linked to the Franco regime. In Germany you wouldn't expected memorials to Hitler or Himmler, Goebbels or Heydrich Streets," Prof. Preston told Sputnik.

In April the left-wing Mayor of Madrid, forced through the renaming of two streets named after two of Franco's generals, José Millan Astray and Garcia de la Herranz.

"Catalonia and the Basque Country are two cancers in the body of the nation! Fascism, Spain's remedy, will exterminate them, slicing healthy, living flesh like a scalpel," Millan Astray said in a speech in 1936.

Across Spain volunteers working with the Association for the Recovery of Historical Memory have found dozens of mass graves dating from the civil war.

Local and regional governments have funded exhumations and DNA tests have sometimes been paid for by relatives through crowd-funding.

Remedios Ferrer, 66, found out her anarchist grandfather, Mariano Brines, was killed by summary execution a few months after the end of the war and found his grave at Paterna, just outside Valencia, the last city to remain in republican hands.

"It makes me sad and angry, because it was heart-breaking for my mom, and before her for my grandmother, to know that grandpa was buried here like an animal," said Ms. Ferrer.