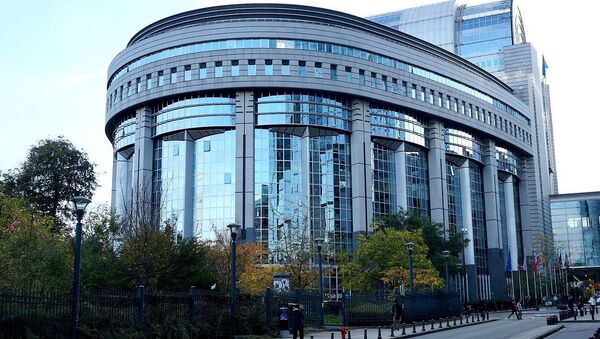 Demond Cureton
All materialsWrite to the author
Two American tech giants are in hot water again after some of Europe's largest press agencies accused them of unfair business practices, a joint press statement said on Tuesday. The agencies demand changes to European copyright laws set for debate next week.

Some of Europe's biggest news agencies lambasted Google and Facebook in a joint statement on Tuesday, accusing the tech giants of "plundering" news for free and urged them to share more revenues with the media, APF reported.

CEOs from around 20 agencies, including France's Agence France-Press, Britain's Press Association, and Germany's Deutsche Presse-Agentur endorsed the statement, which demanded that European parliamentarians update copyright legislation to help tackle a "grotesque imbalance" in the EU.

"The internet giants' plundering of the news media's content and of their advertising revenue poses a threat both to consumers and to democracy," the statement read. "Can the titans of the internet compensate the media without asking people to pay for access to the internet, as they claim they would be forced to?"

"The answer is clearly 'yes'," it continued.

European Parliament lawmakers plan to debate the bill in an upcoming plenary session September 12 and will battle over Articles 11 and 13, which challenge large media platforms like YouTube and force Google to pay newspapers, magazines, and news agencies for linking to their content.

Lawmakers voted down 318 to 278 in a July plenary meeting. US tech companies strongly oppose the bill along with internet freedom advocates, who worry that the new regulations could raise consumer costs.

"I regret that a majority of MEPs did not support the position which I and the Legal Affairs Committee have been advocating. But this is part of the democratic process," Danish EPP and copyright law advocate Axel Voss said on July 5.

The proposed legislation would protect "news publishers and artists, especially the smaller ones" who were not getting paid enough due to the "practices of powerful online content-sharing platforms and news aggregators," a June 20 press release said.

"This is wrong and we aim to redress it. The principle of fair pay for work done should apply to everyone, everywhere, whether in the physical or online world."

Press agencies forged the joint statement after Facebook earned $40 billion in revenues and $16 billion in profits for 2017. Google earned $12.7 billion on $110 billion worth of sales, it stated.

"Who could reasonably argue that they are not in a position to make fair payment for the content they use?" the agencies asked. "What we are really talking about is introducing a fair payment by those who have ripped off the news. For the sake of Europe's free press and democratic values, EU lawmakers should press ahead with copyright reform."

The announcement comes after Yves Mersch, European Central Bank executive board member, slammed Google, Apple, Facebook, and Amazon (GAFA) on Monday for having unfair levels of market penetration in Europe and hindering innovation in European fintech companies. He added that growing dependence on foreign providers would increase because banks are "resisting the objectives of PSD2 on this front," and urged greater continuity of operations in the interest of Europeans.