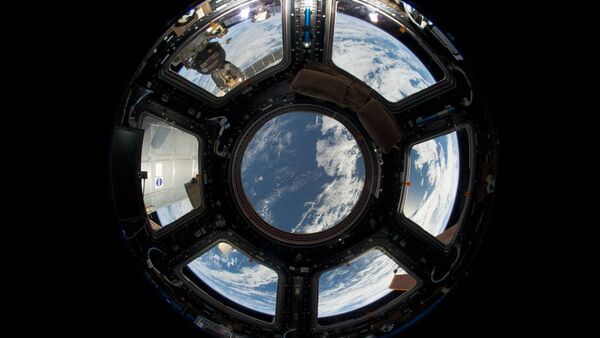 © NASA
Subscribe
International
India
Africa
Sputnik will get you up to speed on the depressurization incident involving a Soyuz-MS spacecraft, which caused a scare aboard the International Space Station late last week.

On Tuesday, a source in the space and rocket industry told Sputnik that Energia Rocket & Space Corporation would be checking all of its Soyuz and Progress aircraft for manufacturing defects following last Wednesday's air leak incident.

The checks will start in the Moscow region city of Korolov, where over a dozen spacecraft are under construction, in the coming days, and extend to the Baikonur Cosmodrome, where a Soyuz MS-10, Soyuz MS-11 and Progress MS-10 set for launch later this year are located.

Science & Tech
Russian Soyuz, Progress Spacecrafts to Be Checked After Air Leak - Source
On Monday, Dmitry Rogozin, director of Roscosmos, told reporters that a commission was checking whether the air leak, currently believed to have been caused by a 1.5 mm hole in the spherical upper compartment of the Soyuz, known as the orbit module, was accidental or deliberate, and whether it was caused on the ground, during the ship's construction, or in space.

In any case, Rogozin noted, the accident was not caused by a meteorite, as initially suggested. The official pointed to evidence of "several attempts to impact [the ship] by a drill," and said there were signs that the hole was the work of someone with an "unsteady hand," given that the drill appeared to have slid over the surface of the affected area.

Rogozin said that the commission would help find out exactly who was responsible for the mistake.

A more outlandish theory, proposed by former cosmonaut and Duma lawmaker Maxim Suraev, suggests that it could not be excluded that the hole could have been drilled by a mentally unstable member of the ISS crew. The necessary tools for doing so are onboard the station, he said. "We are all human beings; anyone may want to come home, but this is a completely unworthy way of trying to do so," the lawmaker noted, speaking to Sputnik.

Science & Tech
ISS Leak Repaired: Internal Cabin Pressure Stabilized - NASA
In his remarks, Rogozin said that deliberate sabotage could not yet be ruled out.

Earlier, Russian media, citing sources in the space industry, said that a worker, already identified, had accidentally drilled the hole, and then sealed it with a special sealant instead of reporting the mistake. The sealant lasted through extensive compression testing before launch and then for two months while the Soyuz was already in orbit, before finally giving way, resulting in the air leak, according to one source.

Scare Aboard the ISS

Russia
Russia to Stop Transporting US Astronauts to ISS in April 2019 - Deputy PM
On August 30, the ISS suffered a partial decompression, prompting the six cosmonauts and astronauts aboard to take precautionary measures and gather in the Russian segment of the station, where they sealed the section off from the rest of the station. The next day, Russian cosmonauts sealed the hole with a special epoxy-based sealant with metallic additives using an onboard repair kit.

Asked for comment on the incident on Tuesday, NASA referred Sputnik to the Roscosmos commission to investigate the possible cause of the leak.