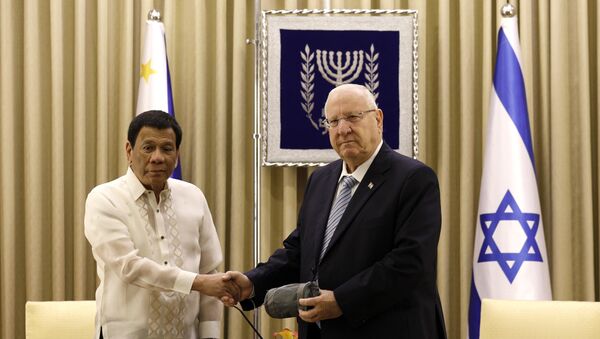 © AP Photo / Gali Tibbon
Subscribe
Duterte, the first Philippine president to visit Israel, is known for his outspoken rhetoric and policies. Duterte's hallmark is his anti-drug campaign, which he once compared to the Holocaust, saying that we would be happy to kill drug addicts like Hitler killed Jews.

The landmark visit of Philippine President Rodrigo Duterte to Israel was accompanied by protests on Tuesday.

Dozens of demonstrators crowded together outside Israeli President Reuven Rivlin's residence prior to Duterte's arrival. They were waving Israeli flags, blowing whistles, and chanting "shame, shame, shame. We will not be silent and we will not agree to the selling of weapons." Some were carrying placards that read "Stop the killings."

Duterte, the first Filipino leader to pay a diplomatic visit to Israel since the two countries established ties in 1957, has pivoted away from his nation's longtime military reliance on the US and is eyeing Israeli-made military equipment for the Philippine coastguard.

The 73-year-old president, probably best known for his contentious anti-drug campaign, has been accused by campaigners of violating human rights. The international community will eventually conclude that Duterte is "responsible for crimes against humanity," human rights lawyer Itay Mack said, as cited by AP.

Earlier in the day, reports surfaced that an Israeli firm had turned down an invitation to a business forum to be attended by the Filipino strongman. Mino Negrin, CEO of water filtration company NUFiltration Ltd, claimed that Duterte "offended our people several times in a public way by comparing himself to Hitler and his manners, in a way that cannot be accepted by the Jewish people."

Duterte's visit has been marred by his unguarded comments on the Holocaust. In September 2016, several months after he came to power, he likened himself to Adolf Hitler and claimed he wanted to kill millions of drug dealers, just as the infamous Nazi leader did with Jews.

The president has apologized for his speech ever since. Moreover, he called Hitler "insane" in a speech at the World Holocaust Remembrance Center in Jerusalem on Monday and lamented the slaughter of millions of Jews during the Holocaust.

Rodrigo Duterte came to Israel on September 2 on a four-day official visit. In a speech in Jerusalem, he said that he sought to ensure the protection and security of the 24,000 Philippine citizens who live and work in the Jewish state.