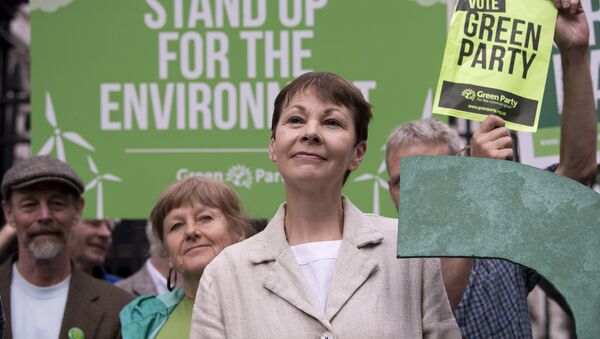 On August 26, UK Green Party leadership candidate Aimee Challenor dropped out of the race, days after the conviction of her father for "committing some of the gravest human rights violations that face women and girls across the world". It’s a scandal the mainstream media seem to have largely missed, the dimensions of which are yet to fully unfurl.

The conviction of David Challenor in August was one of the most heavily-reported pedophile cases in recent UK history, and for good reason. The 50-year-old Coventry resident was found guilty of holding a 10-year-old girl captive in a "torture den" he'd crafted in his attic, where he carried out an assortment of perverse sadomasochistic acts, including electrocution and whipping, while she was tied to a beam.

The court heard he'd dress up as a small girl in adult-sized baby dresses and nappies before carrying out the attacks, and attempted to force his victim to perform sexual acts upon him.

David Challenor raped and tortured a 10y/o girl at the Coventry Green Party HQ. He did so self identifying as a 10 year old girl. Aimee knew this & still had her father as election agent Tina Challenor knew this & stood for GP ALL lived at the GP HQ pic.twitter.com/XsCFGquZCa

After she was finally released, the girl was initially too frightened to tell anyone about her ordeal, but eventually plucked up the courage — and her adult confidant reported Challenor to the police.

Green party statement on David Challenor who raped and tortured a young child. As I expected completely inadequate and patently false. Designed to protect themselves and showing no indication they appreciate the deeply concerning seriousness of what they have allowed to happen. pic.twitter.com/oVpZ3pShhF

After his arrest, Challenor denied the offenses, claiming the girl was "a fantasist" — despite police searches of his property uncovering bondage gear, sex aids, gaffer tape, a stun gun, ropes, his dungeon-style attic and photographs of the abuse he carried out. Despite pleading not guilty, and his wife testifying in his favor, in the resultant trial the jury took mere hours to convict him of all but one charge, jailing him for 22 years.

In a statement, Aimee claimed she didn't know the "full details" of her father's "despicable behaviour" until his conviction, despite the "heinous crimes" taking place in their family home.

"His crimes are abhorrent…but I cannot be held responsible for the actions of my father. I am not to blame for his behavior. I did not go into the attic during my adult life — it was considered ‘dad's space'. That didn't seem unusual for me at the time. While I piece my own feelings back together, I want to underscore that my thoughts are firmly with the survivors of my father's abhorrent behavior including young women whose lives will be impacted forever. I ask for privacy while I rebuild myself and while I look after my mum who is also coming to terms with this," she added.

Green Party Aimee Challenor was a bully who personally attacked and dogpiled anyone who disagreed with her. Now we have found out she knowingly allowed a man (her father) who had been accused of gross sexual offenses, act as her election agent in the GE and the #2018LE.

Whatever the truth of the matter, Aimee certainly was aware David had been arrested and faced trial, but didn't disclose either during the party's formal nomination or selection processes — and even more shockingly, the aspiring Green leader named him as her election agent in the 2017 General Election and the local elections in May 2018.

In September 2015, the offence was reported for which David Challenor just received 22 years in jail, namely the rape and torture of a ten year old girl. On 3rd September 2015 Aimee Challenor posts this ad on her Tumblr, featuring kids playing with sex toys. pic.twitter.com/moCmxuErdm

​In a statement, an unnamed Green spokesperson said a "full investigation into how this was able to happen" had been initiated — and Aimee would not be undertaking any official Green Party roles while the party "urgently" looked into the circumstances.

No one blames Aimee Challenor for her father’s actions. But we can hold her responsible for employing him while he was up for child rape and torture charges

Nonetheless, some clue as to how Aimee managed to suppress her father's role may be offered by her campaign leaflets, which under UK law are required to include the name of a candidate's agent or promoter. Aimee's did not mention David by name, instead referring to ‘Baloo Challenor', her father's nickname, which he used in his work as an assistant Scout leader and volunteer with children's gymnastics.

A pedophilia scandal in the UK Green party ranks has gone under-reported in the mainstream media before. In March 2015, Professor Andrew Dobson — who co-wrote the party's 2010 election manifesto, and ran as a party parliamentary candidate in 2005 — was arrested by police for engaging in sexually explicit chats with underage girls, and downloading images of child abuse.

Meanwhile The Guardian doesn’t even report the Aimee Challenor story: a deputy Green Party leader candidate who stood down because she was employing a man charged with (now in jail for) child rape as her election agent. https://t.co/HxuWwOotyU

A professor at Keele University and author of five books on environmental political theory, Dobson used his home and office computers to have a "considerable amount" of sexually explicit online chats with seven girls aged 13 — 15. He told investigators it was a "fantasy" of his to have sexual intercourse with the children — and searches of his hard drives revealed 14 indecent images classed as Category A — the most serious classification — and 12 Category C.

In January 2017, Dobson pleaded guilty to 17 sex offense charges — including 14 counts of attempting to cause a female aged 13 or over to engage in sexual activity, two of making indecent photographs of children, and one of possessing a prohibited image of a child — and received a 10-month prison sentence, suspended for two years. He was also placed on the sex offenders register for 10 years.

It is not the first time a Green Party scandal has been under reported. Andrew Dobson barely made the news https://t.co/P5D2amtD9f

Pedophilia has also blighted Green parties in other countries. For instance, in 2013, the German Greens instigated an internal probe into the party's historic connections with pedophilia-advocacy groups, issuing a significant apology at a November 2014 press conference for the warm reception such organizations received in the 1980s.

The investigation's findings made clear pedophiles were involved in German Green party activities since its founding in 1980 — its first-ever conference, in the city of Karlsruhe, was attended by many ‘Urban Indians' who advocated legalization of "all affectionate sexual relations between adults and children".

Several articles advocating sex with minors were also published in anarchist magazine Pflasterstrand in the 1980s under his tenure as Editor. In response to the controversy, Cohn-Bendit has alleged such writings were, in fact, fictional "obnoxious [provocations]", intended to challenge conventional thinking about sexual morality at the time.