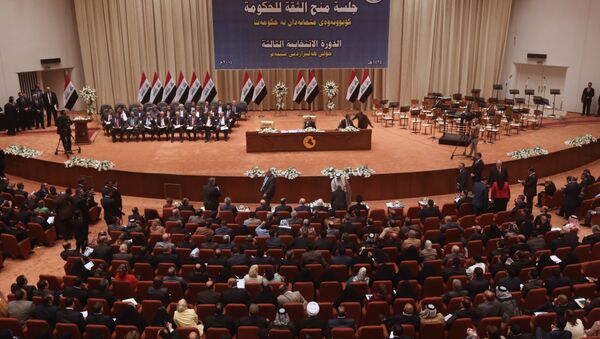 © AFP 2022 / AHMAD AL-RUBAYE
Subscribe
After three years of war with Daesh and three months of a vote recount, Iraq can now form a new government and begin the process of rebuilding.

Sixteen political groups in Iraq, including those of Shiite cleric Muqtada Al-Sadr and outgoing Prime Minister Haider al-Abadi, reached an agreement Sunday to form the largest bloc in the Iraqi parliament.

This agreement, reached just before the first session of the Iraqi Parliament on Monday, gives Al-Sadr the exclusive right to form a government.

Prime Minister Haider Al-Abadi, reportedly backed by the West, is also a part of the coalition. Al-Abadi is purportedly interested in extending his position into a second term, but as he is no longer the only candidate from the alliance, it is uncertain whether he will succeed.

"If the alliance holds, it means that Iran and its allies have failed to take the lead in shaping Iraq's political landscape and would have to join the Al-Sadr alliance if they want to be part of the next government," Arab News reported.

Iraq Ditches the Dollar in Iran Trade, Switches to Euro, National Currencies
Al-Sadr, who positions himself as a nationalist and a fighter against US and Iranian influence in the country, has, according to reports, plans to create parliamentary blocs, a move which is reportedly intended to break the cycle of corruption and conflict that has plagued Iraqi politics.

While the first bloc would be responsible for the formation of an administration and a government, the other would act as opposition and would oversee the performance of the government. Both blocs are expected to include Shiite, Sunni and Kurdish parties.

"The ruling coalition will form the government in all areas, including the positions of the president and the speaker, so we seek to achieve a complete separation between the [political] forces that will be with us and the forces that will be in the opposition," a senior Al-Sadr negotiator told Arab News.

Iran Refutes Reports Alleging Missile Shipment to Shiite Groups in Iraq
"We will not repeat the previous scenario and we will not allow any forces to participate in the government and in the opposition at the same time."

On Monday, the nation's new parliament will hold its inaugural session during which it must elect a speaker as well two deputy speakers, the Daily Mail reported. Following that, the parliament will have 30 days to elect a new Iraqi president, a position that goes to a member of the Kurdish minority with at least two-thirds of the vote. The new president will then have 15 days to task the largest parliamentary bloc to form a new government.

The new government will face the task of rebuilding Iraq after three years of war with Daesh terrorists. The vote took place in May, but a recount process delayed the results for three months.