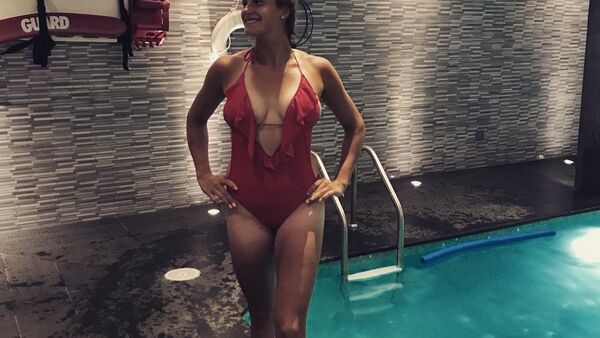 © Photo : Instagram / Aryna Sabalenka
Subscribe
Aryna Sabalenka has stunned her rival Petra Kvitova with serves and backhand as well as her Instagram followers with bikini snaps. She has picked up her first WTA title on the eve of this Grand Slam and doesn't plan to stop yet.

Aryna Sabalenka, a rising 20-year old tennis star from Belarus, stormed into the fourth round at the US Open after a 7-5, 6-1 victory over No. 5 seed Petra Kvitova on Sunday.

Her blistering on-court performance has given a boost to her social media following, which currently exceeds 40,000 on Instagram.

The Belarusian tennis pro regularly treats her audience to vacation pics and in-action photos, proving that she is a beauty both on and off the court.

During a trip to Monaco as part of the WTA Tour, Sabalenka shared stunning pics of herself in a bikini while idling away the time on the back of a boat.

She also marked her visit to Mallorca with a trio of playful snaps on an inflatable watermelon.

"Miss curvy!" an exalted fan wrote under her raunchy snap in a swimsuit after her first WTA victory a year ago.

Sabalenka will face 20th seed Naomi Osaka of Japan in the last 16 on Monday. A week ago, the Belarusian star claimed her maiden WTA Tour title at Connecticut Open, which propelled her to a new career high of WTA World No. 20.

Petra Kvitova became the latest top seed to quit this year's US Open campaign. Earlier on, fourth seed Angelique Kerber, sixth seed Caroline Garcia and 10th seed Jelena Ostapenko all crashed out of the tournament. Their exit follows that of top seed Simona Halep in the first round and second seed Caroline Wozniacki in round two.