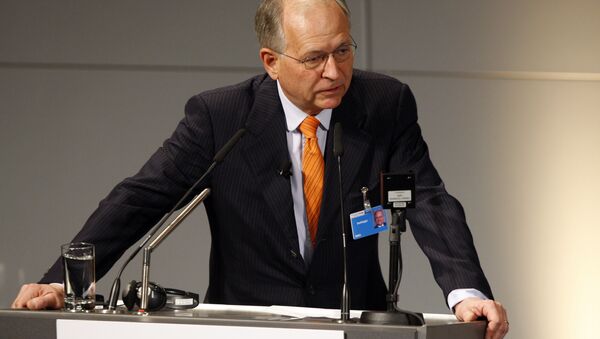 Veteran German diplomat Wolfgang Ischinger is calling the influence of US President Donald Trump on the world stage a prime mover in directing the attention of Germany away from Washington and toward China and Russia.

The more Trump is allowed to wield his increasingly implausible foreign policy decisions, the more likely it becomes that Germany will seek to strengthen its alliances with Russia and China, Ischinger noted in a conversation with Reuters prior to the publication of a new book.

The current chairman of the Munich Security Conference and a former German ambassador to the US, Ischinger called attention to Trump's powerfully destabilizing influence as leader of the wealthiest nation in the world.

In only one and a half years, Trump has removed the US from the landmark 2016 Paris climate accord, ditched America's participation in the hard-fought 2015 JCPOA Iran nuclear deal, and is now threatening to withdraw from the intergovernmental World Trade Organisation (WTO).

The strikingly unpopular US leader has consistently complained that Germany's trade surplus and defense spending are an affront to US economic health and national security.

"The longer Trump remains in office, the harder it will be to stand up to those in this country and elsewhere in Europe who have been arguing since the Vietnam war that we need to cut the cord with America the bully," Ischinger observed, cited by Reuters.

Speaking of the longstanding post-World War II ties Berlin has enjoyed with Washington, Ischinger commented: "It would become much harder for the German government to stay the course and defend this relationship," adding, "a closer relationship with countries like Russia or China might be emboldened."

Recent surveys in Germany have shown that citizens of Europe's wealthiest nation have a remarkably low opinion of the US president, and that a clear majority view Trump as a larger foreign policy issue than authoritarian governments in Turkey, the Philippines or the DPRK.

The German diplomat noted foreign policy decrees of the current White House — consisting primarily of sanctions — and the capricious way that Trump, a former reality TV producer, has threatened to economically punish German and other companies working with Russia to complete the Nord Stream 2 pipeline.

"If US sanctions are applied to prevent Nord Stream 2, the repercussions will be poisonous for the transatlantic relationship," he said, cited by Reuters.

"Even if you have doubts about the wisdom of Nord Stream 2, it is hard not to see this as a serious violation, as an instance of the US forcing its views on the Europeans."

Ischinger's new book, World in Danger, seeks to empower Germans to keep faith in the US as a democratic society while recommending Berlin now take a larger role on the world stage, moving beyond Europe and the EU.