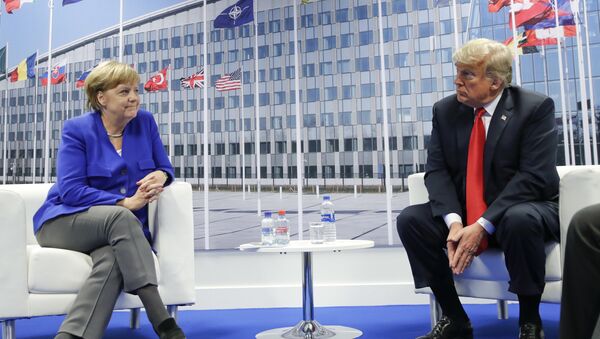 German Foreign Minister Heiko Maas has urged the European Union to stand up for its interests in the face of sanctions and excessive tariffs imposed on its partners by Washington.

“We should not sit like a rabbit in the headlights in the face of [US] economic sanctions and tariffs. We must protect our own interests. It is not only the 80 million Germans we are talking about, it is Europe and the 500 million people living there,” Maas said in an interview with the newspaper Bild published on Sunday.

“It leaves me wondering when Trump lumps Europe together with Russia and China and calls them all enemies of the US,” he noted.

EU Preparing List of Retaliatory Measures If US Imposes Tariffs on EU Cars
He added, however, that it would be “a mistake to equate Trump with the rest of the United States.”

“America is more than just tweets coming out of the White House,” he said.

In March, Washington imposed import tariffs of 25 percent on steel and 10 percent on aluminum, effectively placing a tax on every foreign shipment of those metals into the United States.

Although the US initially postponed their imposition on close trading partners Canada, the European Union and Mexico, on June 1, 2018 the tariffs went into effect.

The tariffs angered Washington’s trading partners, who retaliated by slapping similar levies on imported US goods.

He also threatened to punish foreign companies that continue doing business with Tehran.

READ MORE: EU-US Showdown Over Iran Sanctions a ‘Trainwreck in the Making'

A second wave of sanctions to target Iran’s energy sector is scheduled to come on November 4.

Brussels, for its part, has pledged to protect the interests of European companies that could suffer as a result of Washington’s sanctions.

000000
Popular comments
It is not so complicated for EU to economiclly come to the end with US. But we are not there yet. First major US vassal has to leave, then occupation soldiers from WWII have to return to US and then continental Euope will begin to "make order" in regions around it. Currentlly seems like US is making intentionally disoder to harm Euope economic ineterst just to remain "leader of the west". US can't lea Europe. Euopeis culturally, scientifically and economiclly far above US and with every year of peace in Europe this is more and more evident.
BigShorty
2 September 2018, 15:44 GMT5
000000
The EU, Germany, Russia, Iran etc., have seen the true face of the US through its disruptive destabilizing behavior led by the Great Pumpkin (Dimwit Donald Trump), for these countries to survive this US INSANITY they will have to work together to prosper and to isolate the US as you would a Disease or you will become infected and die with the host (US).