End of US Aid to Palestinians Threatens Regional Peace - Moscow 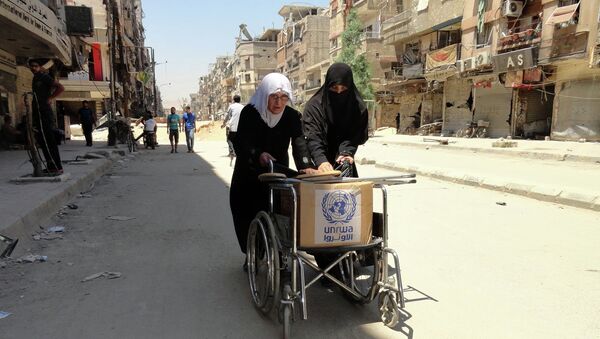 © AFP 2021 / RAMI AL-SAYED
Subscribe
UNITED NATIONS (Sputnik) - The US administration’s move to cut all funding for the UN Palestinian refugee agency will complicate peace process in the Middle East, a spokesman for the Russian mission to the UN said Friday.

"The recent decision by the US will not contribute to the process of settlement in the Middle East [since] a fair solution to the problem of Palestinian refugees is an integral part of that process," Fedor Strzhizhovskiy said.

The US State Department spokeswoman, Heather Nauert, said Friday the United States would no longer make any contributions to the UN Relief and Works Agency (UNRWA).

A spokesman for the UN’s Palestinian refugee agency rejected Saturday US claims that the charity was "irredeemably flawed" after the United States cut funding for its aid programs.

"UNRWA expresses deep regret and disappointment at the US’ announcement that it will no longer provide funding to the Agency after decades of staunch political and financial support," Chris Gunness said.

3. We reject in the strongest possible terms the criticism that UNRWA’s schools, health centers, and emergency assistance programs are “irredeemably flawed”. RT

Trump Indicated Peace Plan for Israel & Palestine Must Have Compromise – Scholar
He said the US move was surprising given that they renewed a funding pact last December, which acknowledged the agency's "successful, dedicated and professional management." The agency will now work to engage its remaining donors, including countries from the Gulf, Asia and Europe, and look for new partners, the spokesman vowed, saying the aid organization would "continue to provide high quality services and assistance."

In January, the State Department announced a freeze on $65 million out of the planned $125 million for the UNRWA this year. The decision came after US President Donald Trump said that Palestinians lacked the willingness to hold peace talks with Israel and had no respect for the United States, despite the financial aid it provided.

000000
Popular comments
It's OK Palestine, THAT special envoy is on his way to talk to Jordan, Turkey, Israel and a couple of other's, THAT special talk of funds and WAR and those selected sites to strike and WAR and military build up and WAR. Did I mention WAR.... Letting the eye's of masses follow donbas for a couple of days that should cause some irritation then off to south America for a little stir, then the Russian Military games!? And WAR meanwhile the pieces shift!