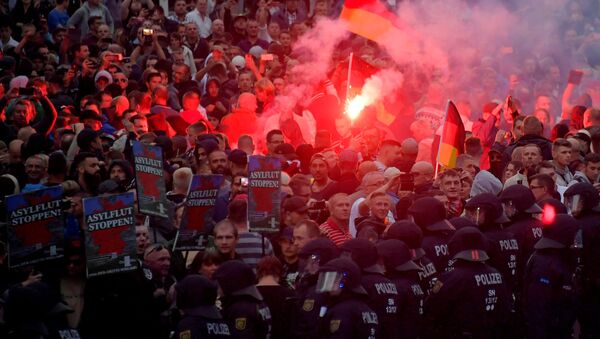 © REUTERS / Matthias Rietschel
Subscribe
International
India
Africa
At least 11 people were reported injured Saturday as Germany’s Chemnitz entered its seventh day of protests over the fatal stabbing of a 35-year-old German citizen, allegedly at the hands of Middle Eastern immigrants.

At least 11 people were injured over the last day in anti-immigrant rallies in the city of Chemnitz in southeastern Germany, local media reported Saturday.

All those injured were taken to hospitals, the Bild tabloid reported, citing city officials.

Currently, all public events in the city have been officially stopped, and police have used water cannons to disperse participants.

According to the Bild, the crowd chanted "Resistance!" and "Merkel must leave!," as clashes erupted between demonstrators and police.

​An estimated 8,000 took part in street protests on Saturday in Chemnitz, local police said. About 4,500 participants took part in an anti-immigrant demonstration organized by the right-wing Alternative for Germany (AfD) party and the PEGIDA anti-Islamic movement, joined by the For Chemnitz movement.

​About 3,500 people participated in a Heart Instead of Hatred action, supported by a number of German lawmakers from the Social Democratic Party (SPD), as well as from the Die Linke and the Green parties.

Some 300 people have been taken into custody Saturday, a police press release reads.

​Since last Sunday, Chemnitz has witnessed a wave of violent anti-immigrant protests after a 35-year-old German was fatally stabbed and two alleged perpetrators, an Iraqi and a Syrian, were promptly arrested on suspicion of murder.

Late on August 26, hundreds gathered at an uncoordinated demonstration in the center of Chemnitz, prematurely terminating a city holiday. Right-wing radicals, shouting threats against migrants, took part in the rally.

On Monday, two more protests took place in the center of Chemnitz — an anti-fascist rally and a demonstration organized by the For Chemnitz movement, formed after the Sunday murders, uniting right-wing radicals who are demanding the immediate deportation of all undocumented immigrants from the German territory. Rallies have continued throughout the week.