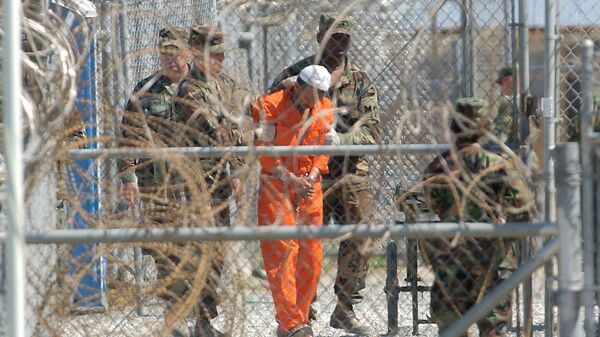 © AP Photo / Lynne Sladky, File
Subscribe
International
India
Africa
The notorious US prison in Cuba is largely known for keeping its detainees indefinitely without trial and for allegations of torturing prisoners. The US claims to incarcerate individuals that are too dangerous for conventional prisons there and has refuted UN demands to close the facility.

The idea of sending several high-profile Daesh* captives to the offshore US prison in Guantanamo Bay has reportedly been met with stiff criticism by some US politicians, according to NBC News. Senator Jeanne Shaheen expressed concern that sending them to the Cuban prison will turn those terrorists into martyrs, making them material for terrorist recruiters. Republican Senator Lindsey Graham suggested that after Guantanamo the Daesh* fighters could be moved to the US for proper prosecution in a federal court.

Donald Trump's administration is reportedly looking into the possibility of sending top Daesh* militants to Guantanamo, while sending hundreds more to Iraqi prisons. The reason behind the move is that no other state had reportedly agreed to take them in.

The US prison at the Guantanamo Bay naval base was created in 2002 amid the War on Terror to detain dangerous prisoners, mostly terrorists. They are often held indefinitely without ever being tried for their purported crimes. Former US President Obama tried to close the camp as the UN demanded, but he met strong bipartisan opposition on that point and was forced to sign a law, prohibiting the transfer of Guantanamo prisoners to US soil.

US President Donald Trump has praised the prison as a place to detain "bad dudes" such as Daesh members. On January 2018 he signed an order to keep the Guantanamo Bay prison open indefinitely.