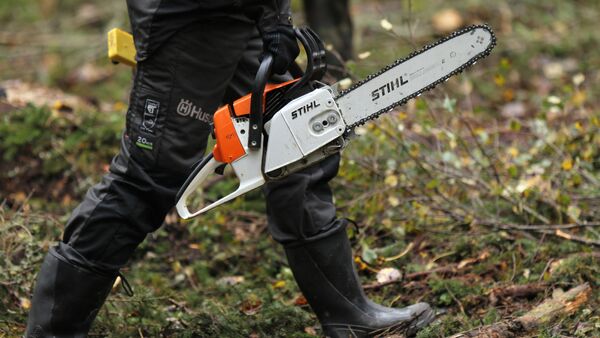 The assailant has been handed a two-year prison sentence for the senseless attack which took place in South Yorkshire, England, according to the Crown Prosecution Service (CPS.)

A terrifying amateur video footage of a brawl between neighbors on a Barnsley estate has been circulating on social media, showing a man, Stewart Palmer, engaged in a heated argument with a neighbor, refusing to leave her front garden despite her repeatedly telling him to do so.

“Get off my property,” the woman told Palmer countless times.

Her partner later intervened and threw several punches, while another woman got involved, as neighbors recorded the brawl on their smartphones.

Barnsley’s finest. Man comes back with a chainsaw 😮😂 pic.twitter.com/MR1nNurhfg

​After the brawl, the man later returned armed with a chainsaw and charged toward the mother as she ran inside her home screaming. Her child can also be screaming in fear over the sound of the chainsaw.

Authorities said the incident occurred as a result of a “dispute” between neighbors and the victim claimed she was “terrorized” by the man on a daily basis, without elaborating.

“He [Stewart Palmer] was charged with affray, having an offensive weapon and criminal damage to property,” a spokesperson for the Crown Prosecution Service (CPS) said in a statement, confirming his sentence.