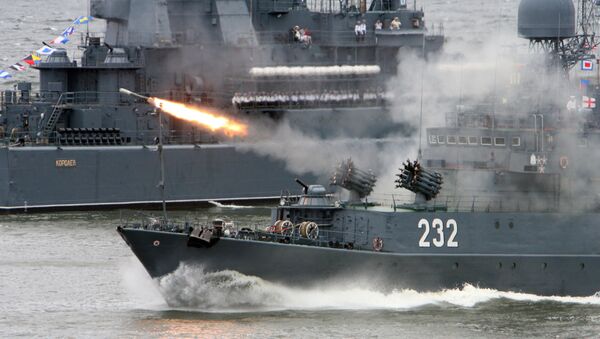 "A total of 26 combat vessels, including two submarines, as well as 34 aircraft will take part in the training exercises. The Northern Fleet's [Slava-class] Marshal Ustinov missile cruiser will lead the naval task force participating in the drills," Korolev said at a briefing.

Russian Envoy to US: Militants to Create Provocation in Idlib Aided by UK Forces
According to the admiral, the naval drills will also involve Tu-160 strategic bombers, Tu-142 and Il-38 anti-submarine warfare planes, as well as Su-33 and Su-30SM fighter jets.

Russian Navy Commander-in-Chief Adm. Vladimir Korolev also warned that the area of the naval drills in the Mediterranean has been declared temporarily dangerous for regular navigation and air traffic.

READ MORE: Russia Warned US About 'Groundless and Illegal Aggression Against Syria' — Envoy

"In order to strictly observe the norms of international law, as well as to ensure the safety of navigation and aircraft flights, the training areas have in advance been declared temporarily dangerous for navigation and air traffic," Korolev said at a briefing.

The Russian naval chief stressed that after the completion of the exercises the participating forces will return to their home bases.

The US Defense Department told Sputnik earlier on Thursday that it was aware of reports of a huge military exercise planned by Russia in the Mediterranean Sea this week, and hoped it would follow the rules of safe conduct.

State Department Says US Will Respond to Chemical Weapons Use in Idlib, Syria
"We are aware of the media report about a Russian exercise," spokesman Eric Pahon said. "As such, we expect that Russian ships operating in the Mediterranean Sea would conduct themselves safely and professionally, in accordance with international laws and customs."

Pahon emphasized that the US Navy had a routine presence in the area and elsewhere in the world, "and just like any other country, we operate freely in international waters," he said.