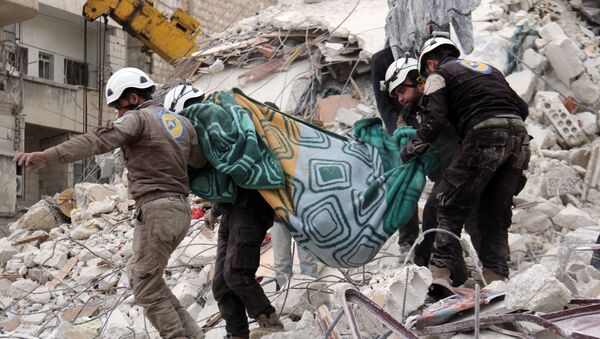 Moscow is calling on the international community to realize its responsibility to prevent regular provocations with chemical weapons in Syria, Russian Foreign Minister Sergei Lavrov said.

"I would still not talk about the risk of using chemical weapons, but about the risk of provocations using chemical weapons in order to blame the Syrian government afterward, because such a provocation is being prepared, there is no doubt. Both in the UN and in The Hague, where the headquarters of the OPCW is located, we submitted concrete facts that were obtained from different sources," Lavrov said.

The minister also called on the international community to realize its responsibility for preventing regular provocation with chemical weapons in Syria.

"It is necessary to make efforts so that the international organizations feel their responsibility for the provocations being planned [in Syria] and speak up against such attempts," Lavrov stressed.

The Russian Foreign Minister stated that Syria had every right to chase "terrorists" out of the rebel-held Syrian enclave of Idlib, emphasizing that talks were ongoing to set up humanitarian corridors there.

"In this area, in this de-escalation zone, there must be a separation of the armed opposition, ready for dialogue with the government, from terrorists of Jabhat al-Nusra [banned in Russia] and other organizations recognized as terrorist by the UN Security Council. Terrorists oppose such separation," Lavrov said.

Russia Warned US About 'Groundless and Illegal Aggression Against Syria' - Envoy
He said terrorists "are trying financially and by other means, including through intimidation, not to let the armed groups that do not make part of Jabhat al-Nusra… leave the area and even force them to cooperate with them."

Syrian Foreign Minister Walid Muallem has warned of possible US-UK-French aggression and of the disastrous consequences of Western attempts to destabilize the country.

He also stated that the White Helmets had kidnapped 44 children in Idlib to use in a staged chemical attack.